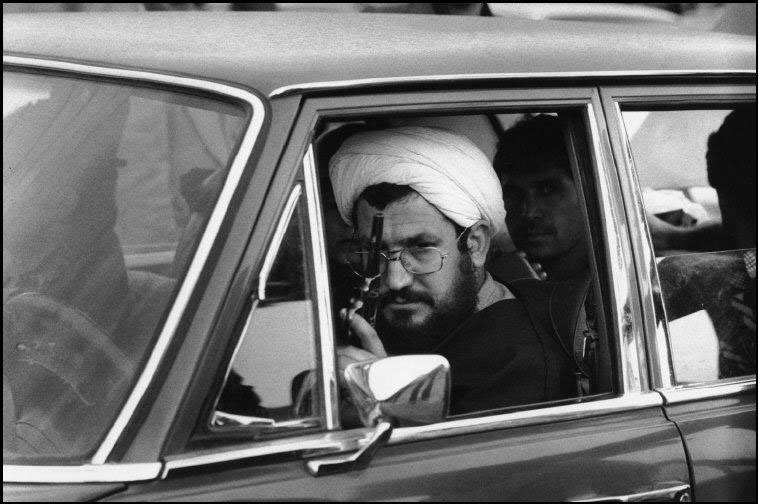 IRAN. Tehran. February 11th 1979. A mullah, sitting in a luxury car, exhibits his weapon on the day of the victory of the Revolution. | License 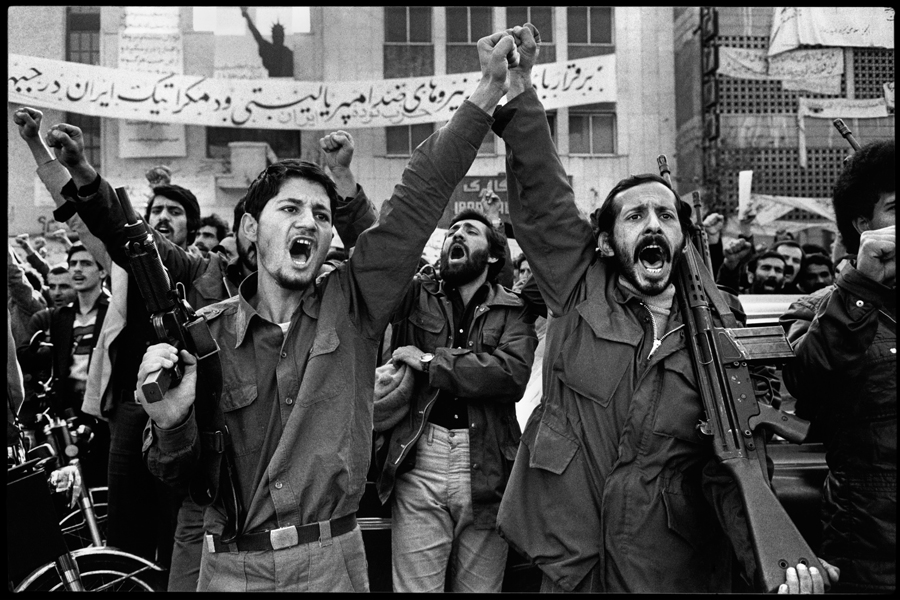 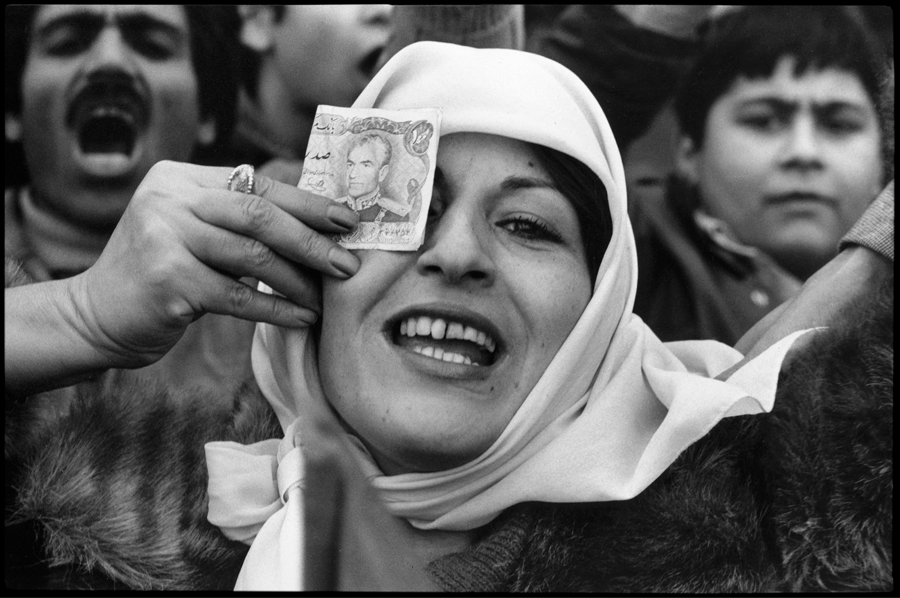 IRAN. Tehran. February 1979. At a pro-Shah demonstration at the Amjadiyeh Stadium, a supporter puts a banknote with the Shah's portrait to her eye as a sign of allegiance. | License 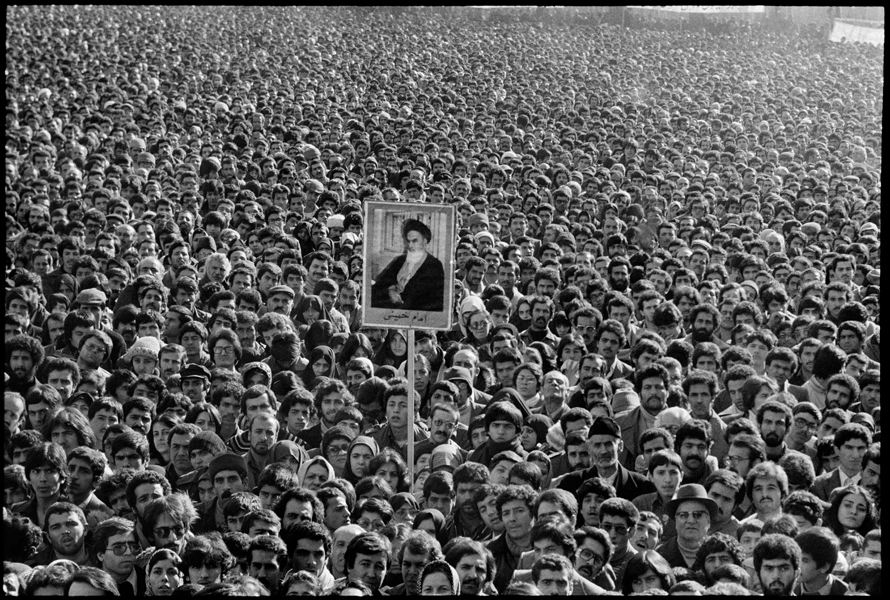 IRAN. Tehran. 1979. Ayatollah Ruhollah KHOMEINI's portrait is exhibited by the crowd attending the opening of the Tehran university. The future President of the Islamic Republic Mahmoud AHMADINEJAD is at the bottom right, behind the man in the fur hat. | License 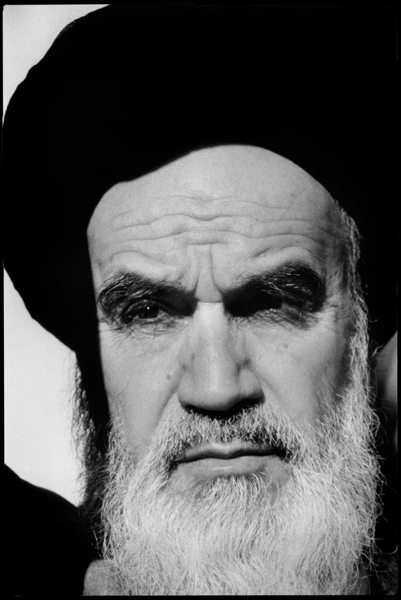 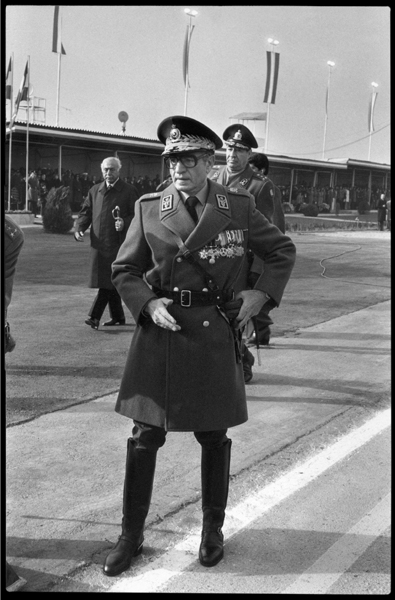 IRAN. Tehran. December 12, 1977. Iran celebrates the victory of its army over separatists of Azerbaidjan, the northern province which was occupied by Russian troops during World War II. The Shah in uniform at a military parade, behind him a General later executed by the Revolution. | License 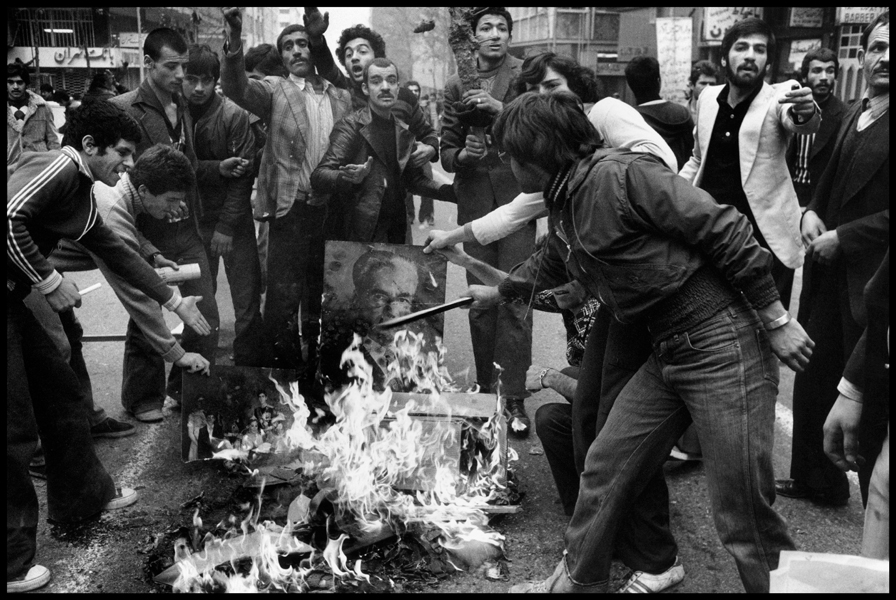 IRAN. Tehran. December 1978. Rioters burn a portrait of the Shah as a sign of protest against his regime. | License 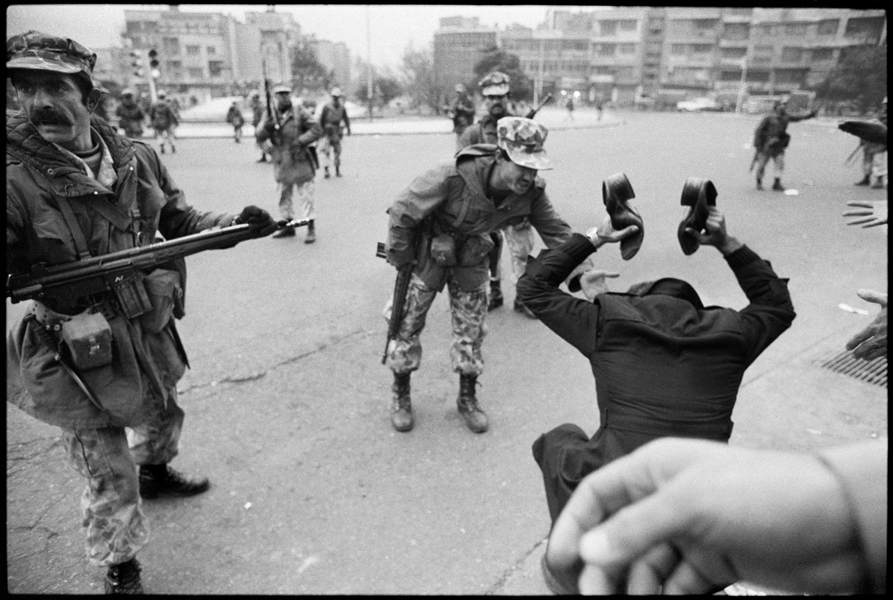 IRAN. Tehran. 1978. A rioter brandishes the shoes of a dead comrade, killed by army gunfire. The soldier argues that it was not his unit which opened fire. | License 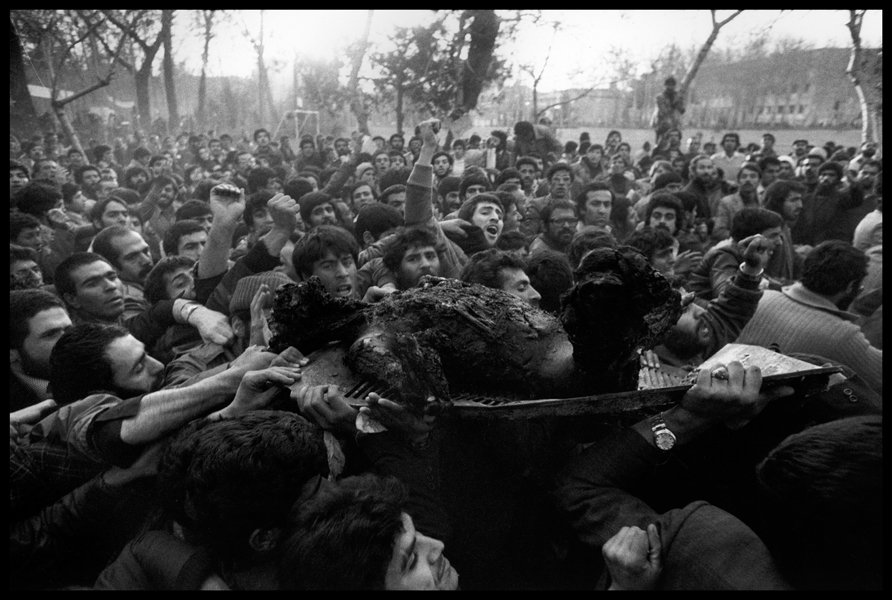 IRAN. Tehran. 1979. A revolutionary mob exhibits the burned body of a presumed prostitute as evidence of the atrocity of the Shah's regime. The mob had just set fire – "Islamic Purifying Fire" – to the "red light" district. | License 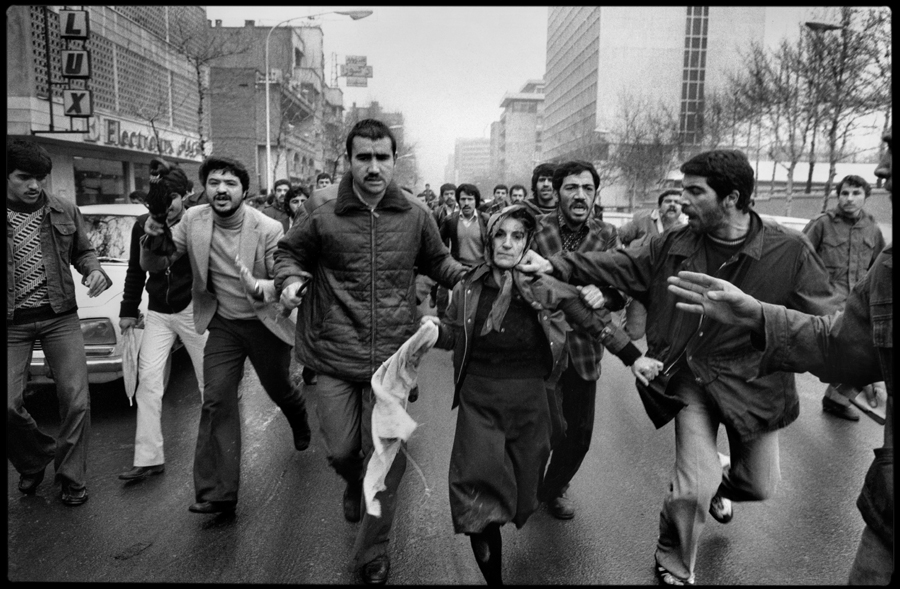 IRAN. Tehran. January 25, 1979. After a demonstration at the Amjadiyeh Stadium in support of the Constitution and of Shapour BAKHTIAR, who was appointed Prime Minister by the Shah before he left the country, a woman, believed to be a supporter of the Shah is mobbed by a revolutionary crowd. | License 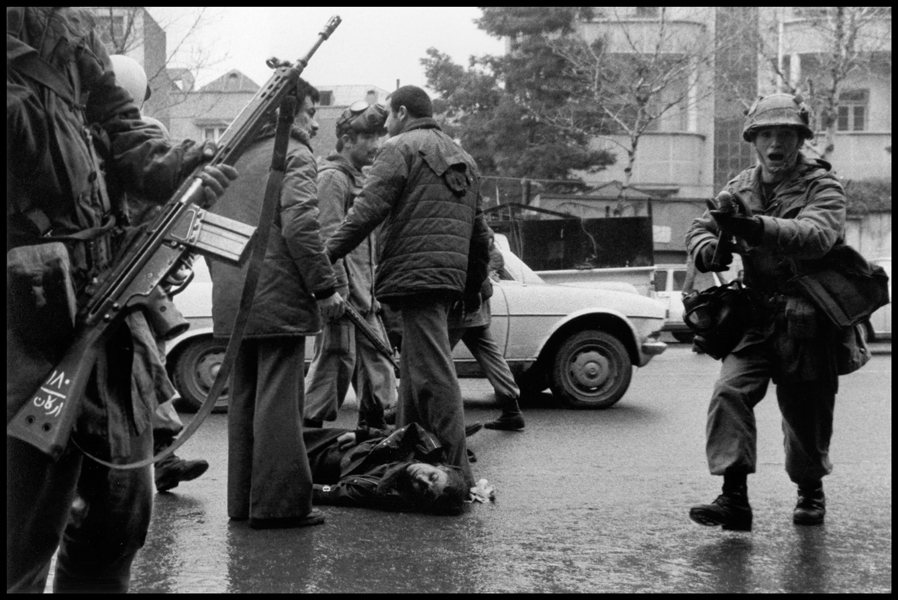 IRAN. Tehran. January 25, 1979. After a demonstration at the Amjadiyeh Stadium in support of the Constitution and of Shapour BAKHTIAR, who was appointed Prime Minister by the Shah before he left the country, a woman, believed to be a supporter of the Shah is lynched by a revolutionary mob. The Army intervenes when the woman faints. The man standing in the middle is believed to be a SAVAK, an officer of the secret service, as he is the only aggressor to have stayed on. Armed forces intervention made the rioters run away. The soldier on the right does not seem to appreciate the photographer. | License 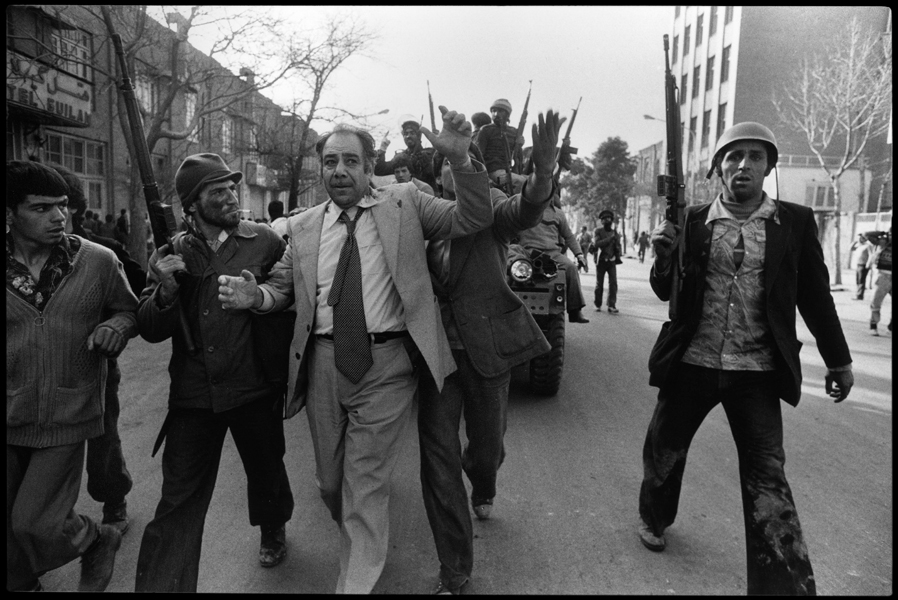 IRAN. Tehran. February 11, 1979. Armed revolutionary mob takes away a presumed member of the SAVAK secret police on the day of the victory of the Revolution. | License 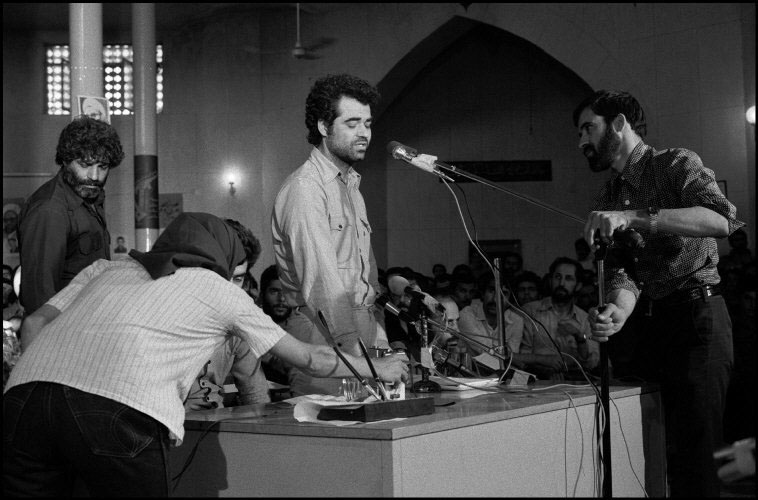 IRAN. Tehran. 1979. 1979. TEHRANI, an officer of the SAVAK (the Shah's secret police), confesses his torture of opponents of the regime to a revolutionary court. He was sentenced to death and executed. | License 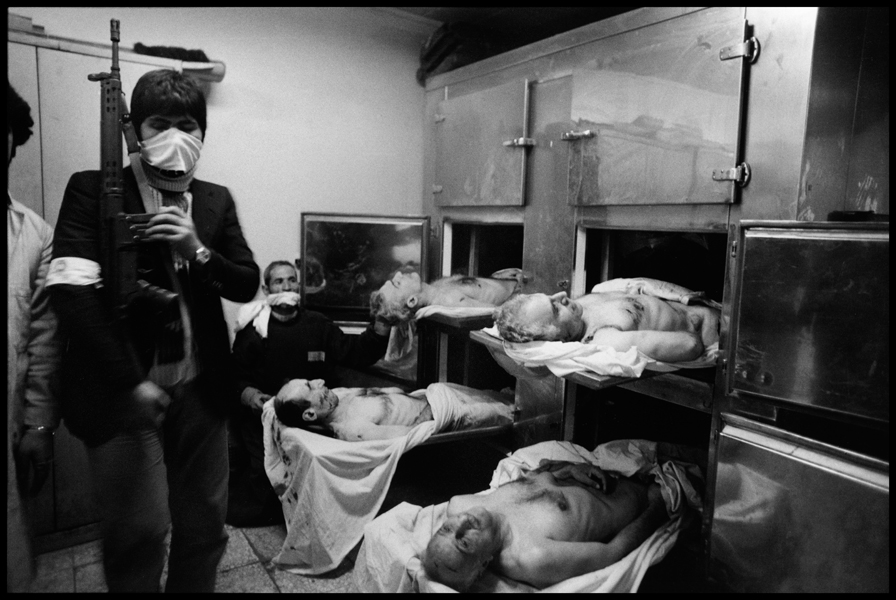 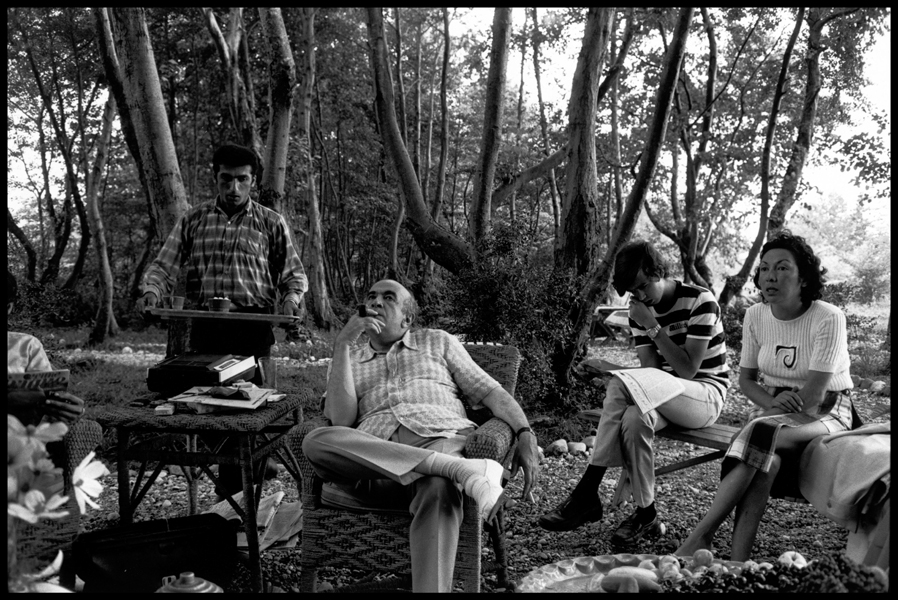 IRAN. Nowshahr. 1971. Prime Minister Amir Abbas HOVEYDA, in his bungalow by the Caspian Sea. On the right is his wife Leyla EMAMI. | License 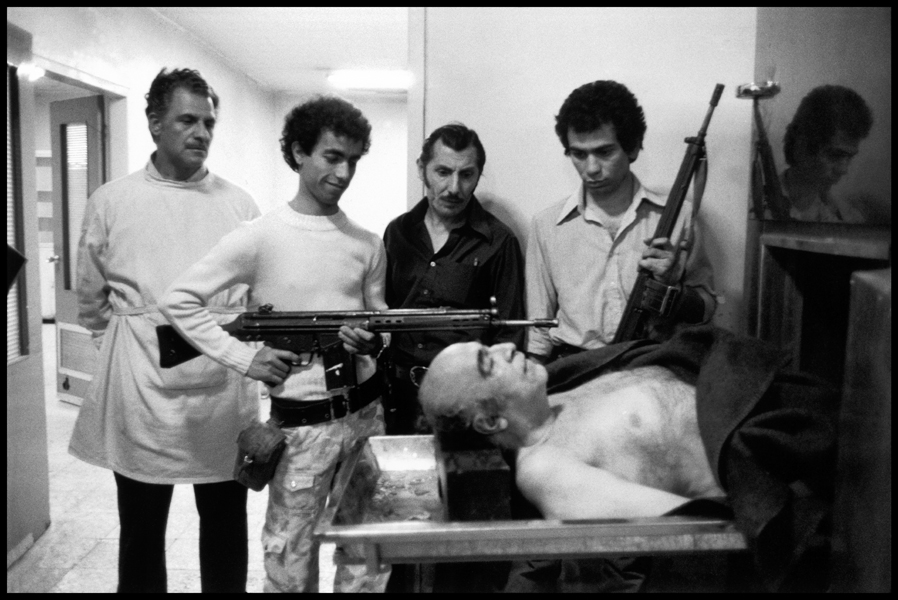 IRAN. Tehran. April 8, 1979. The corpse of ex-Prime Minister Amir Abbas HOVEYDA lies at the morgue. He was promptly executed after sentencing by an Islamic tribunal presided over by mullah Sadegh KHALKALI, the "Hanging Judge". | License 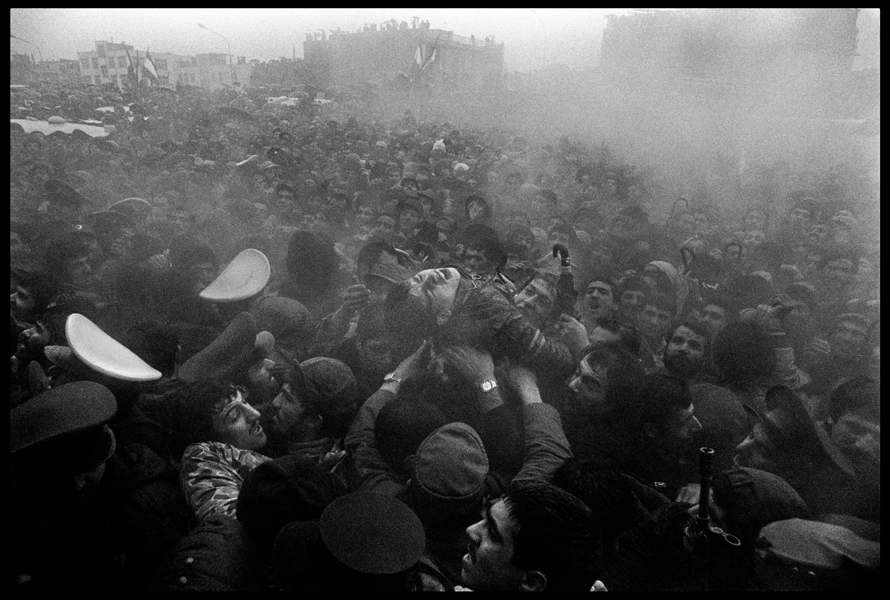 IRAN. Tehran. February 11, 1980. During the celebrations of the first anniversary of the Islamic Revolution, a young man faints in the dense crowd. | License 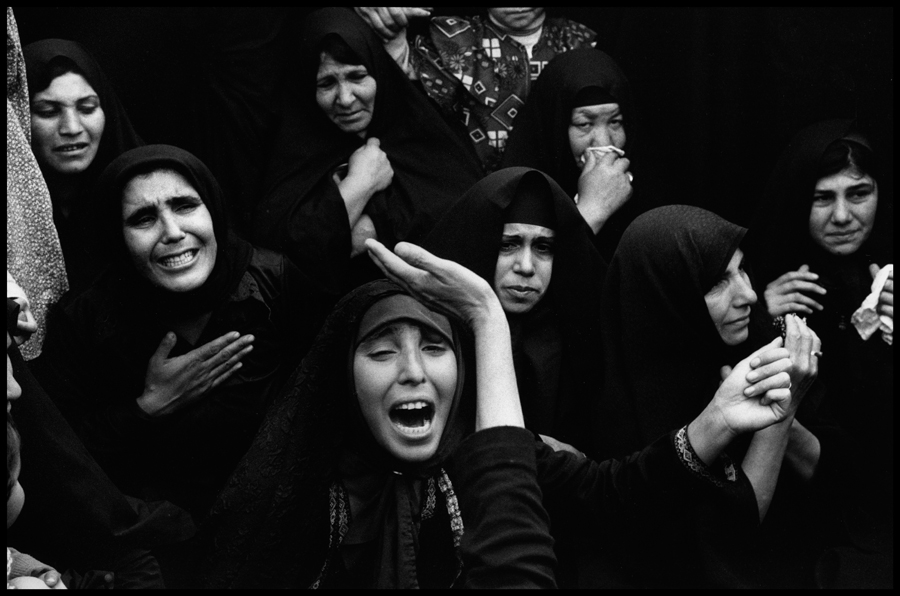 IRAN. Tehran. Behesht Zahra cemetery. April 1979. On the 40th day after his death, women from the Darvazeh Ghar neighborhood mourn a "Martyr of the Revolution", killed accidentally by a militia friend manning a gun. | License 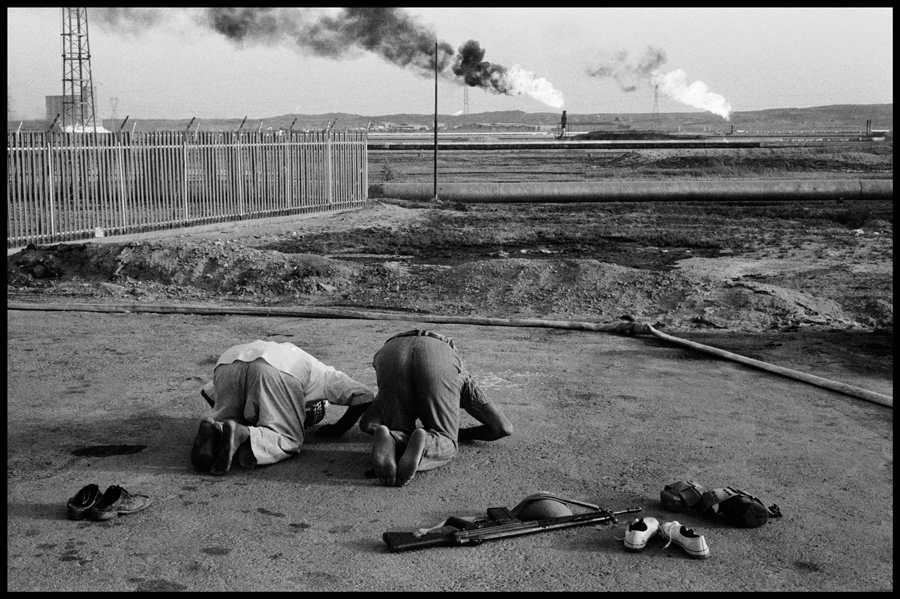 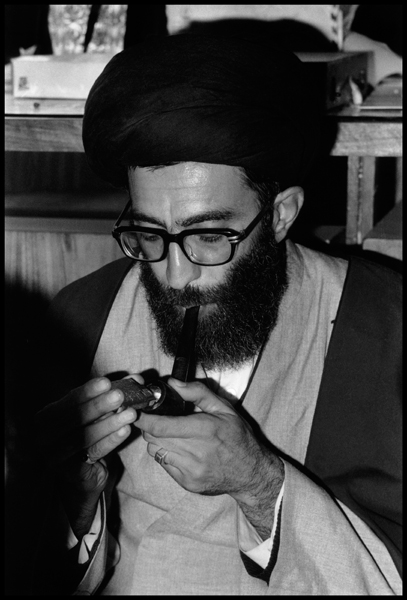 IRAN. Meched. December 1978. Hojjat-ol-Islam Ali KHAMENEI lights up a pipe. He will be made Ayatollah and become President of the Republic and Supreme Guide. | License

Tehran, 11 February 1979   We won! But why did I not let my joy explode, as did all my companions that night? Was it because I saw the face of defeat? That of General Rahimi’s, the commander of martial law in Tehran? Two years ago, I had photographed him in his full imperial regalia, with medals upon his uniform. This evening he is paraded in front of television cameras in his shirt. His interrogation, led by Ibrahim Yazdi, sounds like a trial: “Do you want to repent?”
“I swore allegiance to the Shah and I will not renege on it now!”
A foreign journalist then asks him if he thinks he will be executed. General Rahimi reaches to the sky and says: “I am in the hands of Allah.”

Five days later, I photograph him naked to the waist, in a box at the Tehran morgue. He had been shot during the night, along with three other generals, after a brief – secret – trial.

From that day, the revolution ceased to be mine.