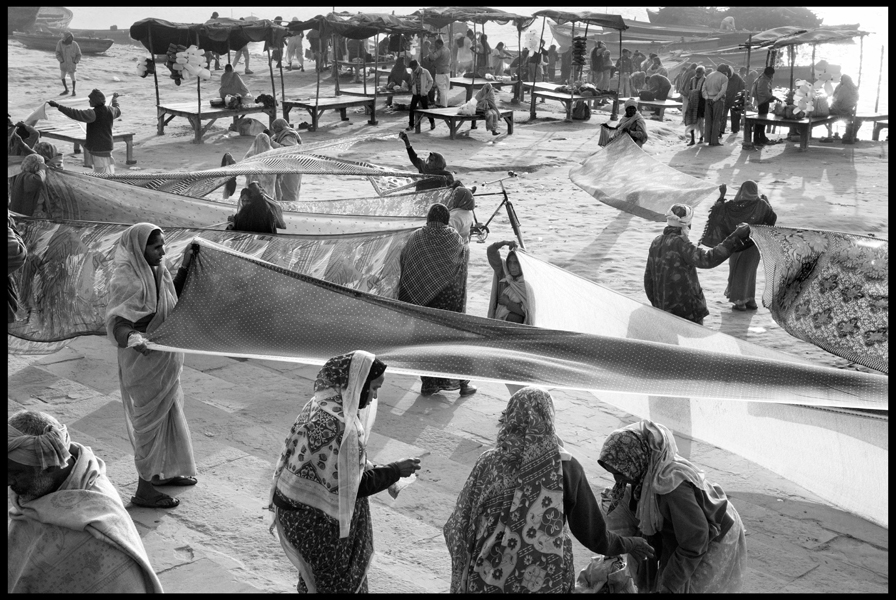 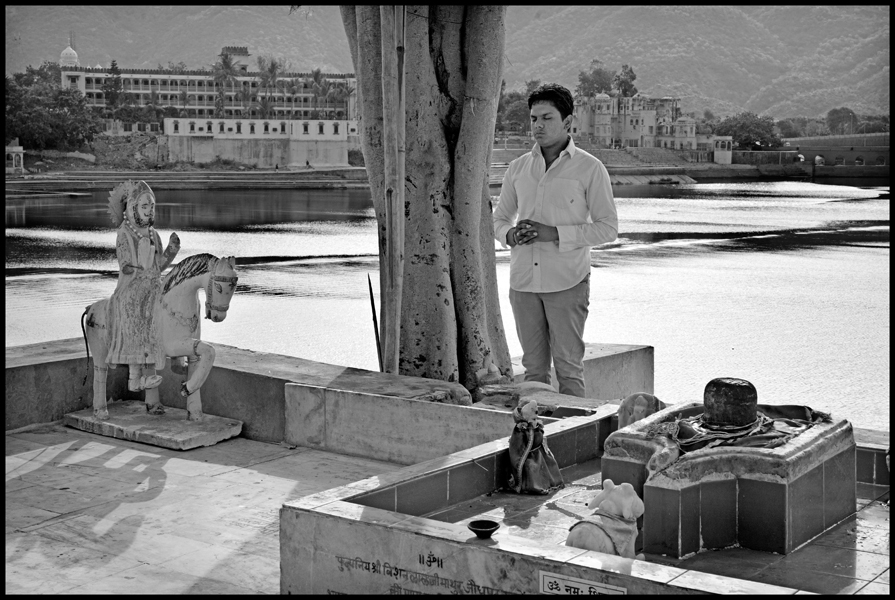 INDIA. Rajasthan. Pushkar. 2013. At dawn, a Hindu devotee prays to an altar by the lake. | License 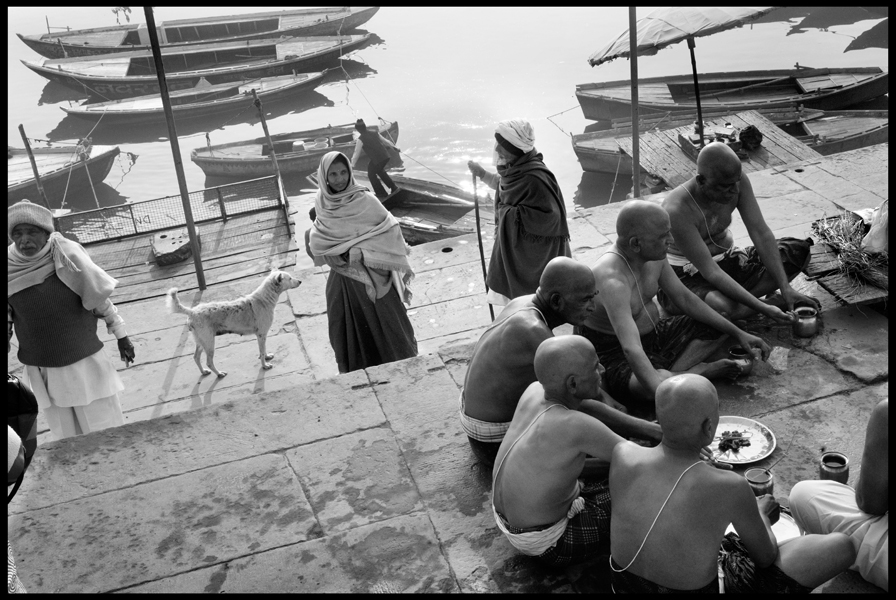 INDIA. Uttar Pradesh. Varanasi. 2011. Led by a Brahmin, Hindu pilgrims perform "Anthyasthi", last rites for their deceased, in a ghat by the river Ganges. | License 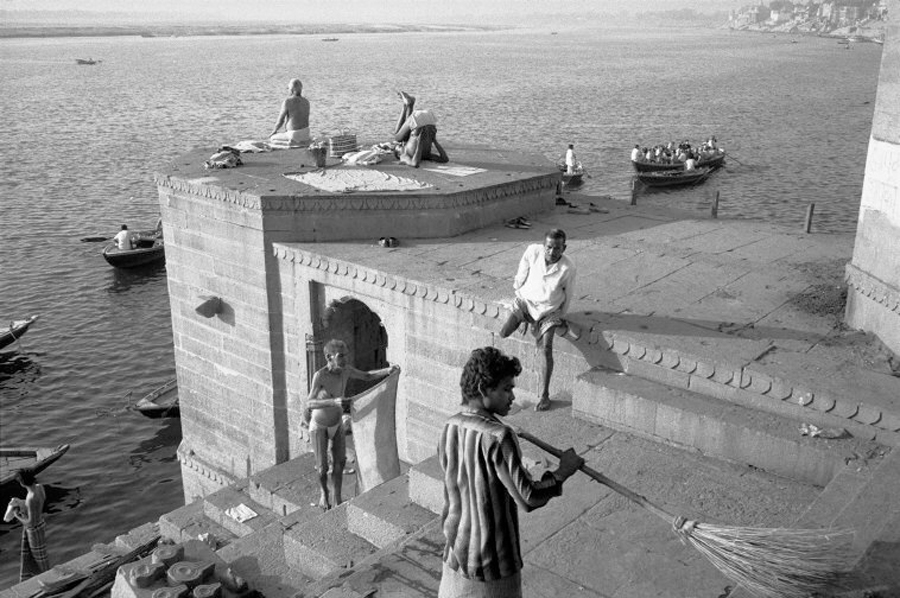 INDIA. Uttar Pradesh. Banares. 1990. Pilgrims at sunrise over the Ganges, a river holy to the Hindus. Hinduism is a religion born out of a culture of water, Islam out of the desert. This difference shows in the devotees' daily practice. | License 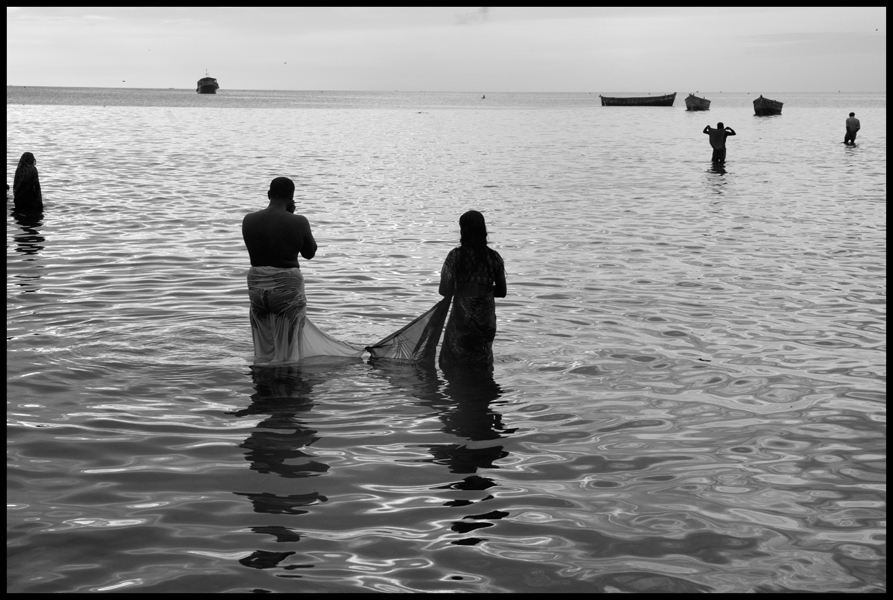 INDIA. Tamil Nadu State. Rameshwaram. 2012. At dawn, a couple performs puja in the sea, facing the sun. The woman's sari is tied to the man's dhoti. | License 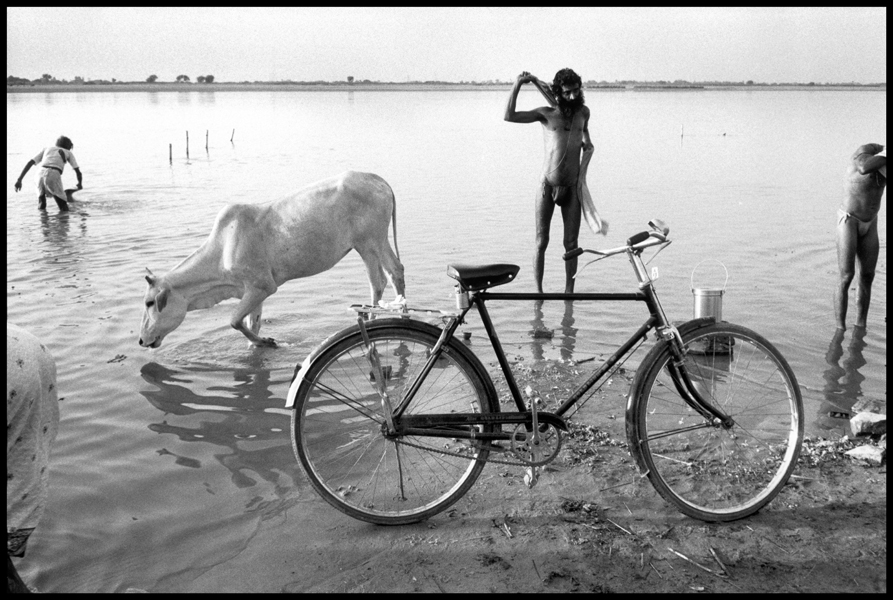 INDIA. Uttar Pradesh. Ayodhya. 1990. A Sadhu (Hindu monk) and pilgrims bathe in the river. A cow drinks from it. | License 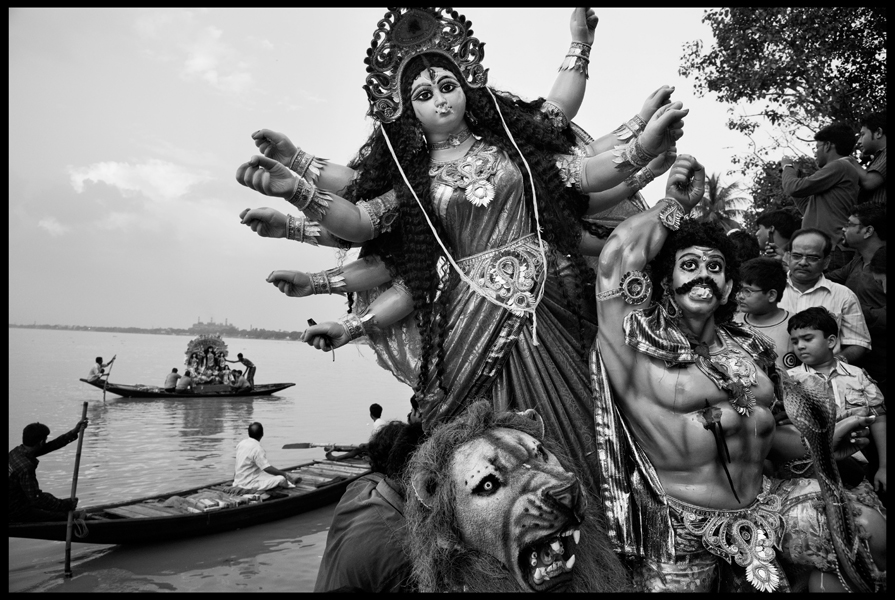 INDIA. West Bengal. Kolkata. 2010. A day after its puja, devotees drown a statue of Durga, the Bengali avatar of goddess Kali, in the Hoogly river (local name of the Ganges). | License 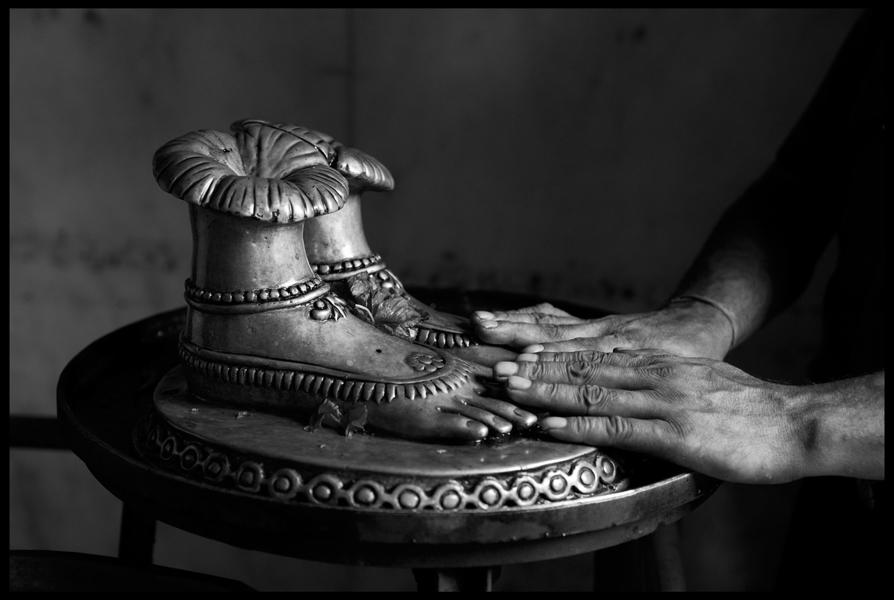 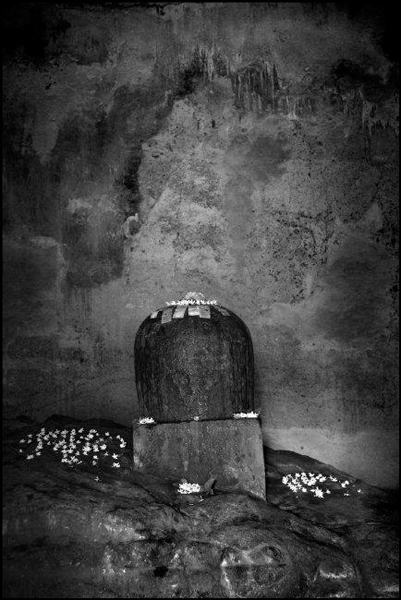 INDIA. Maharashtra State. Near Mumbai. 2012. The ELEPHANTA caves. A stone lingam with offering of flowers and bank notes. | License 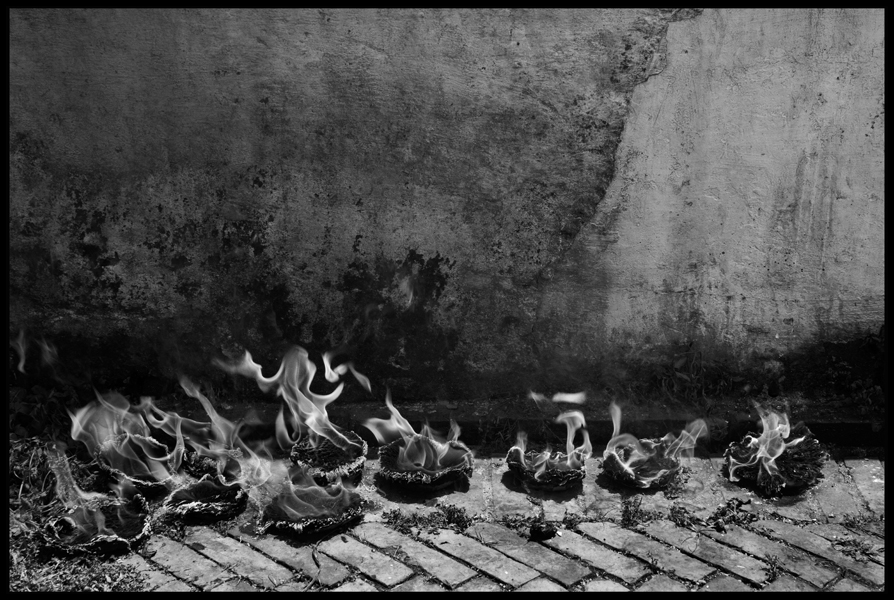 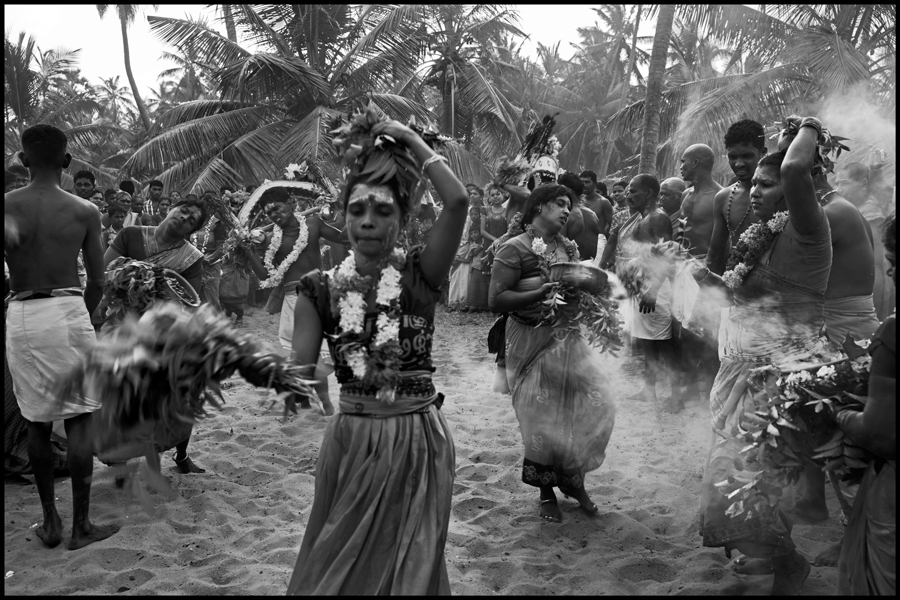 SRI LANKA. Udapuwa. Village in Puttalam district. 2013. Hindus celebrate the Ativila yearly festival. Outside the Mariaman temple, women are in trance, holding a pot of fire or a bouquet of leaves. | License 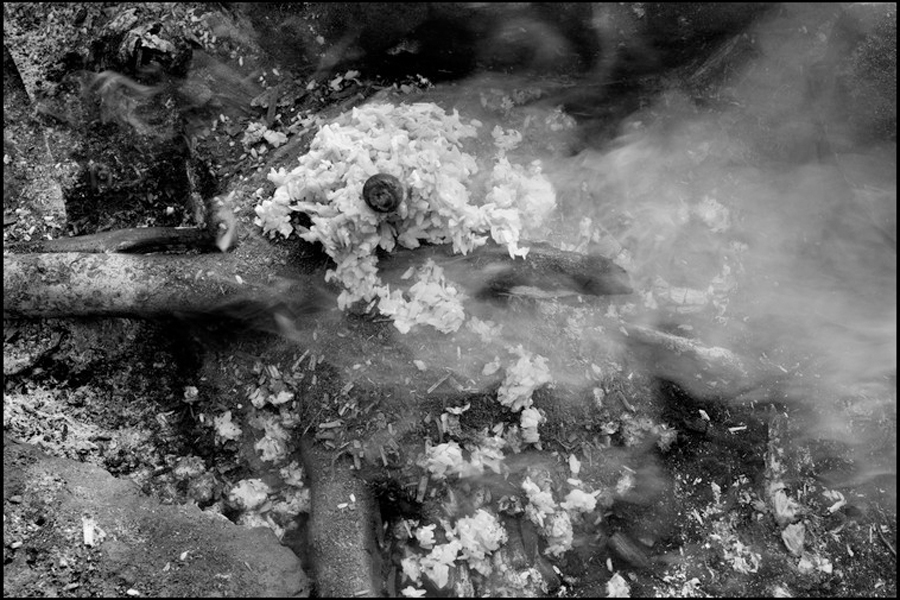 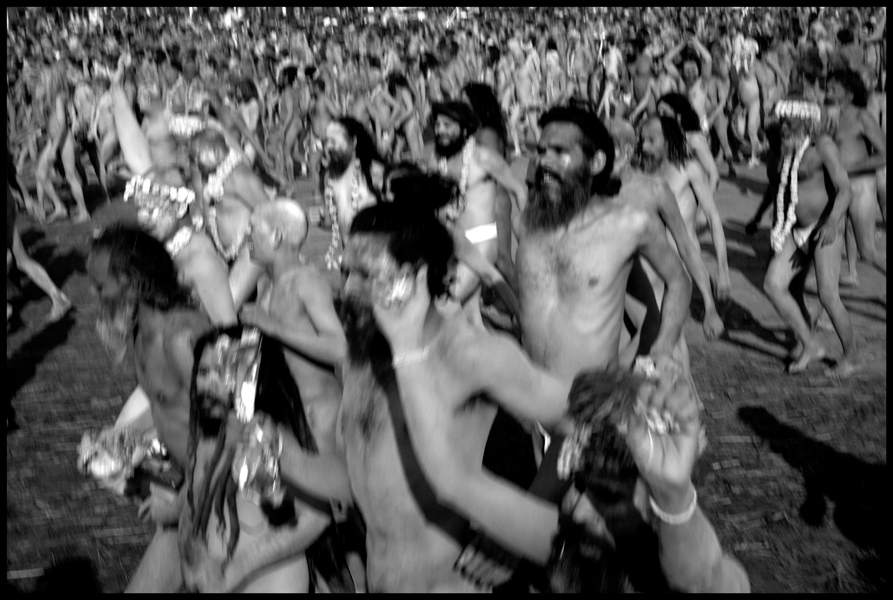 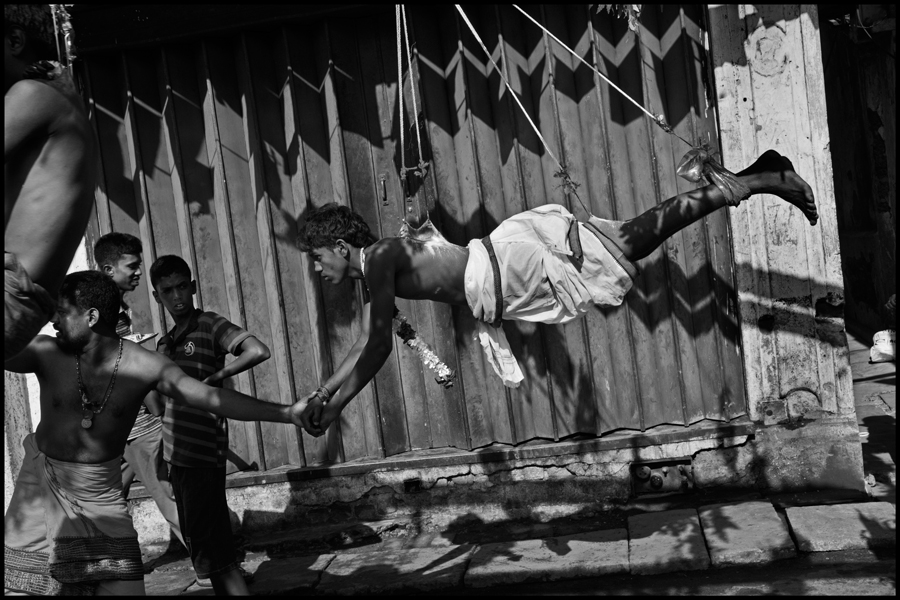 SRI LANKA. Colombo. 2013. The Hindu temple Shiva Subramaniya celebrates its annual festival. A devotee, suspended by hooks inserted in his flesh, follows the Golden Chariot, housing a resident deity, which is paraded in the streets of the neighbourhood. | License 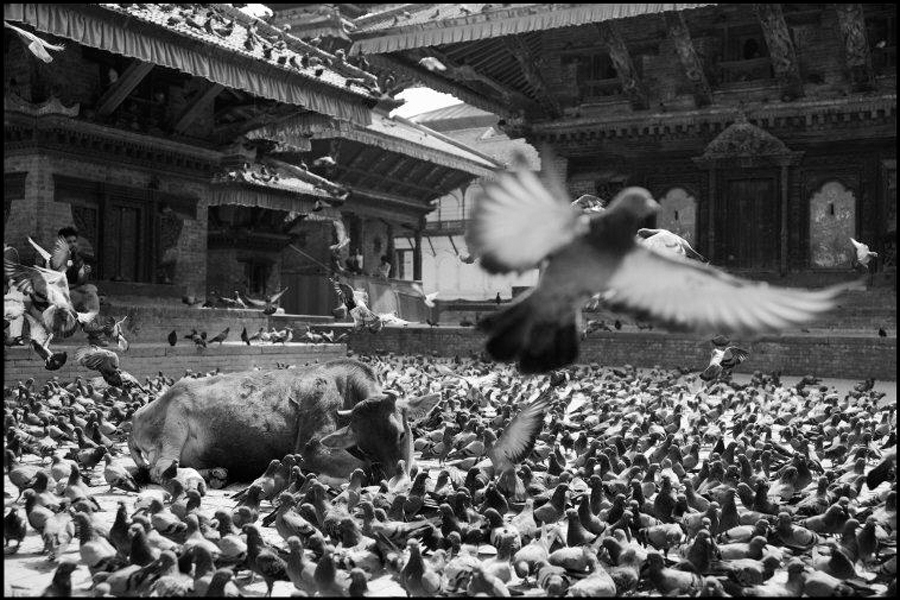 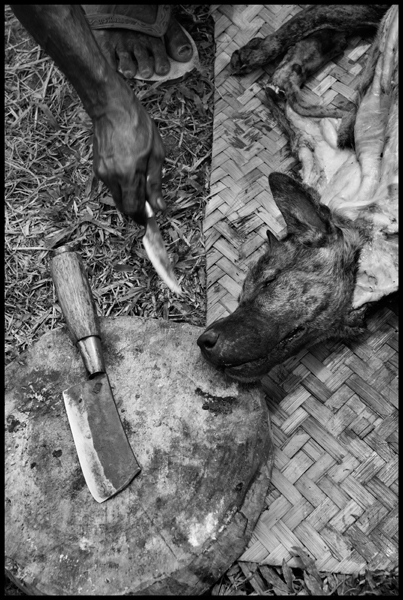 INDONESIA. Bali. 2013. The Junjungan village near Ubud, celebrates a special ritual every thirty years, but none remember the last one. Ceremony in the main Pura Dalem Hindu temple. A dog is skinned, after being sacrificed to the gods. | License 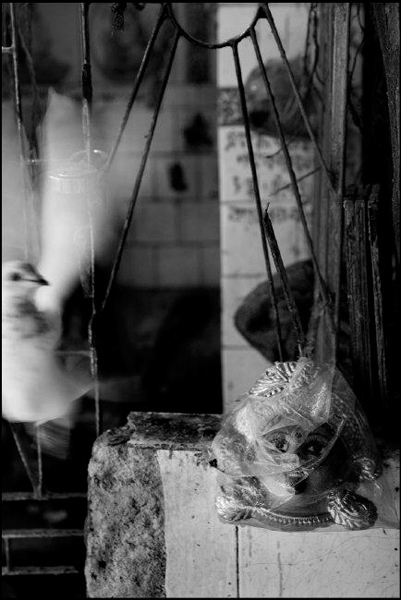 INDIA. West Bengal. Kolkata. Around the KALIGHAT temple. Dove flies next to the head of goddess KALI under plastic. | License 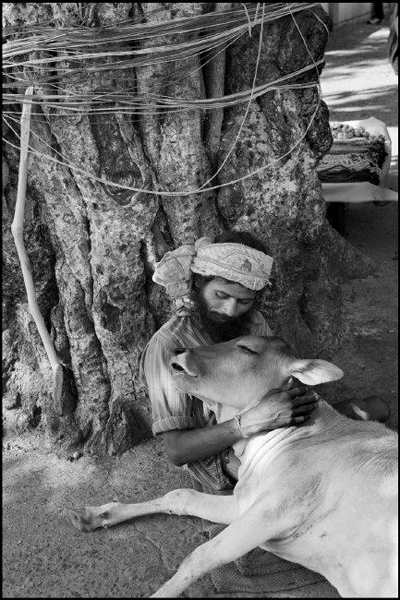 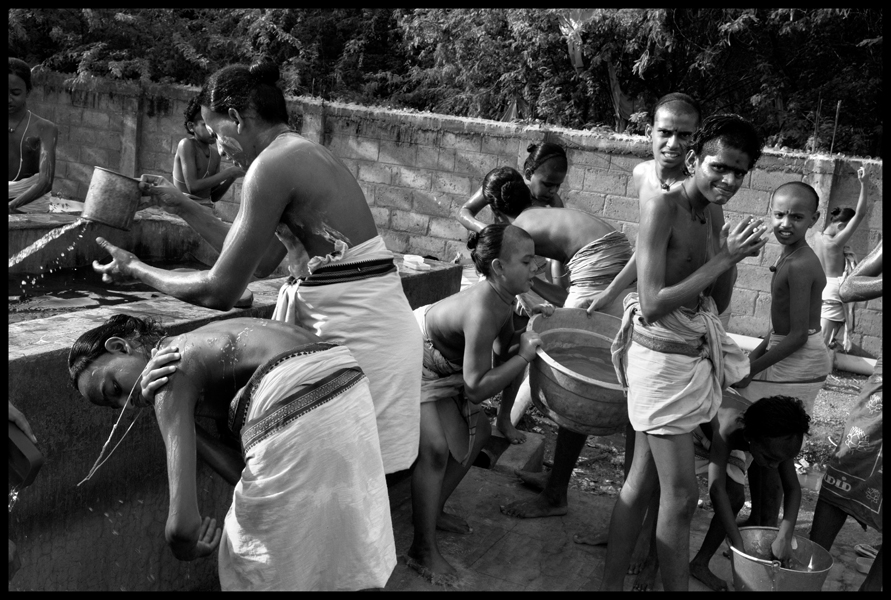 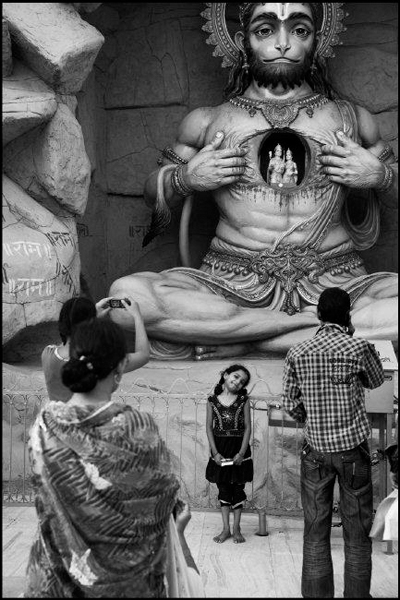 INDIA. Uttarakhand. Rishikesh. 2011. A giant statue of monkey god Hanuman who tears his chest open to let figurines of Shiva and Parvati appear at regular interval, to the delight of visitors. | License 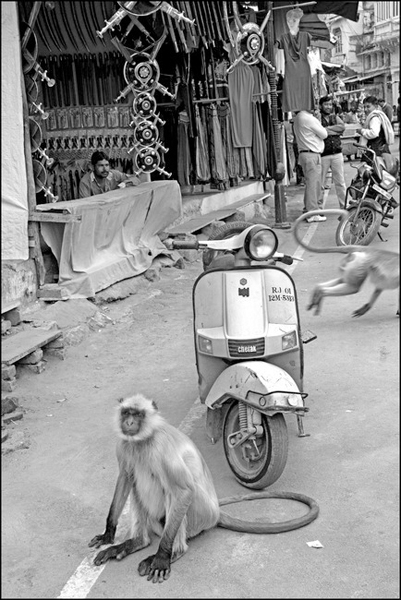 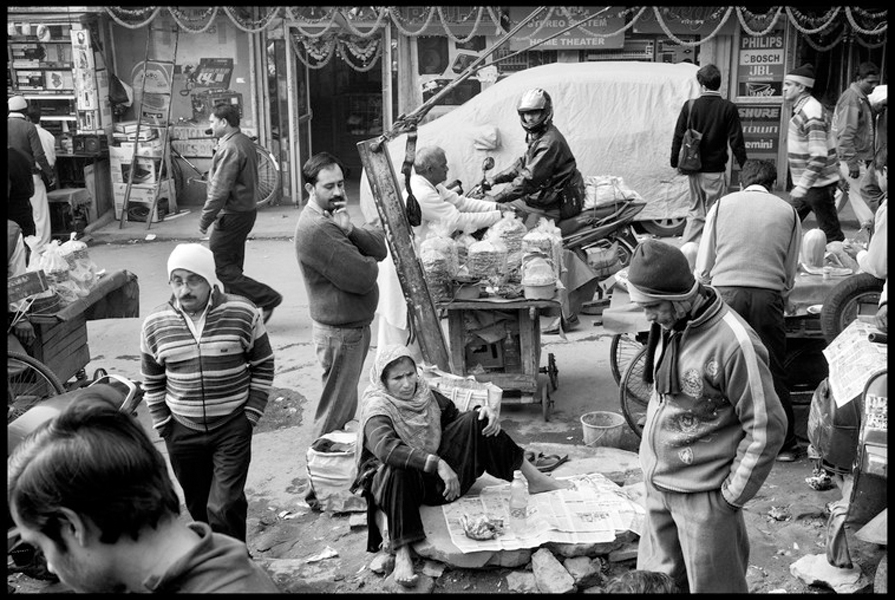 INDIA. New Delhi. A bazaar in Old Delhi, near the Fort. | License 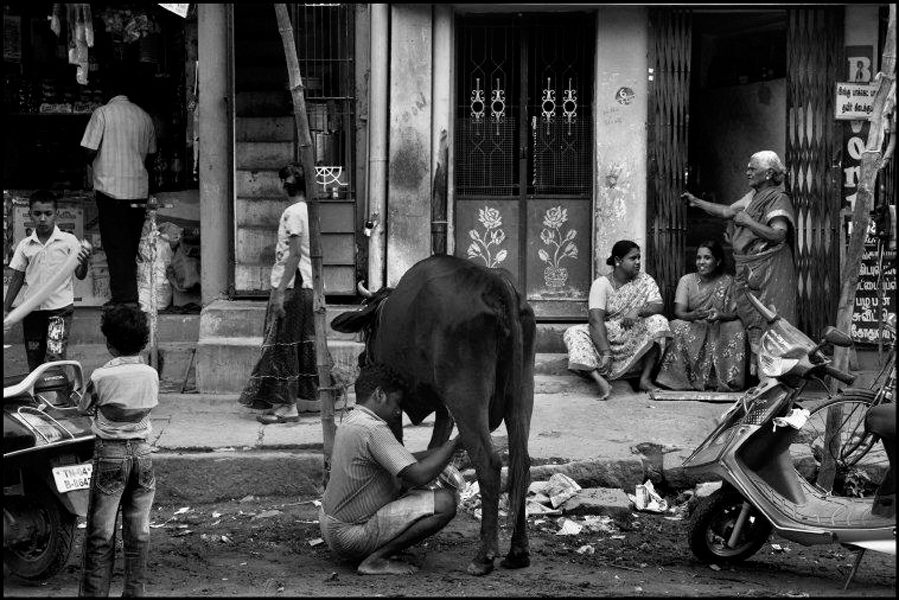 INDIA. Tamil Nadu State. Madurai. 2012. A man milks his cow in the city street, as if he was in a village or a farm. | License 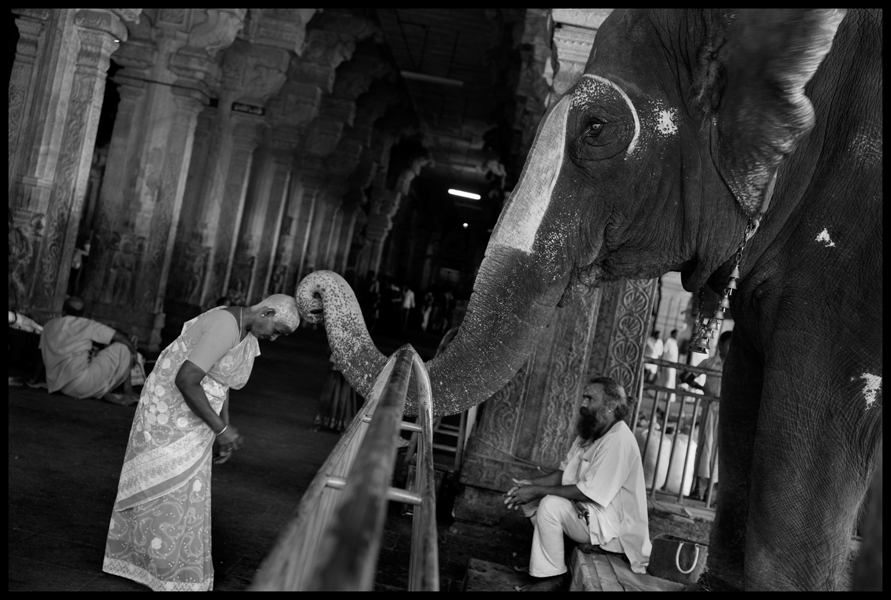 INDIA. Tamil Nadu State. Tiruchirapalli (Trichy). 2012. Sri Ranganatha Swamy Hindu temple. The temple elephant blesses a pilgrim with his trunk after receiving a cash donation. The pilgrim has offered her hair to a resident deity and her shaved head is covered by tumeric paste for protection. | License 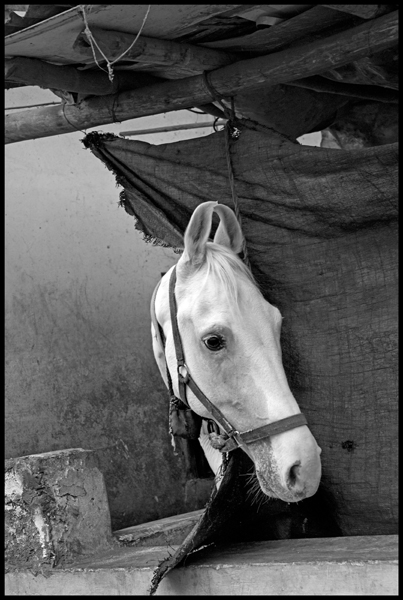 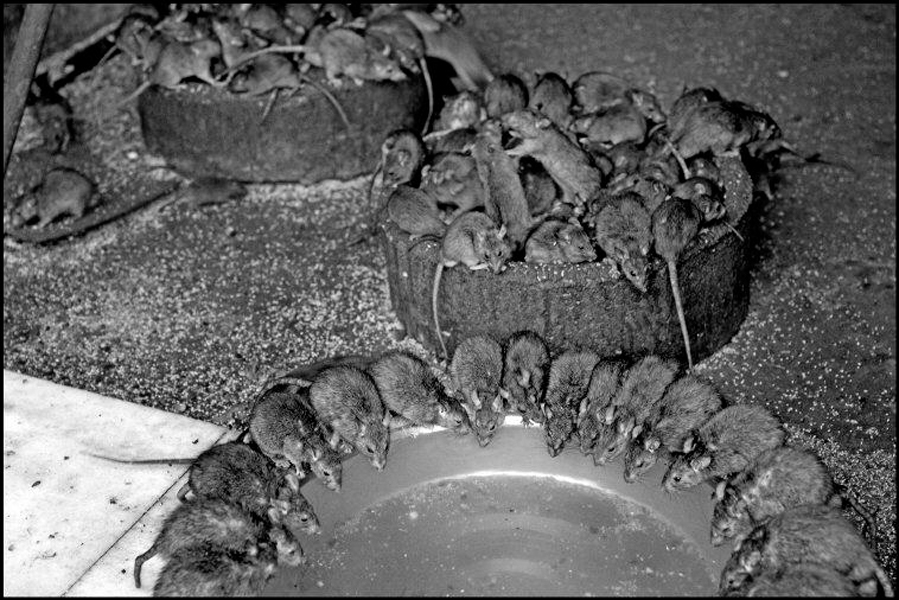 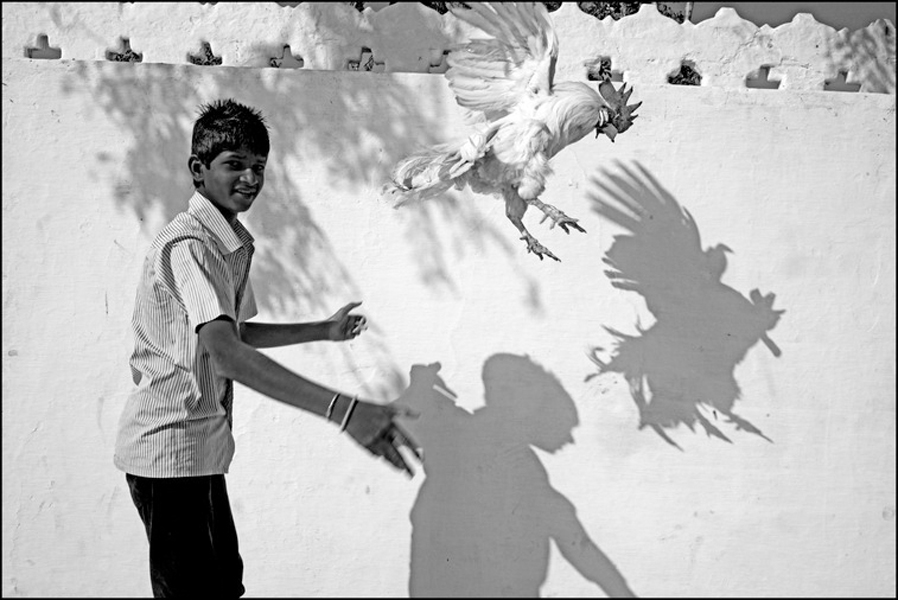 INDIA. Rajasthan. Udaipur. 2013. The AMABAMETA Hindu temple, where cocks roam freely around as the temple's pets. A young boy plays with one. | License 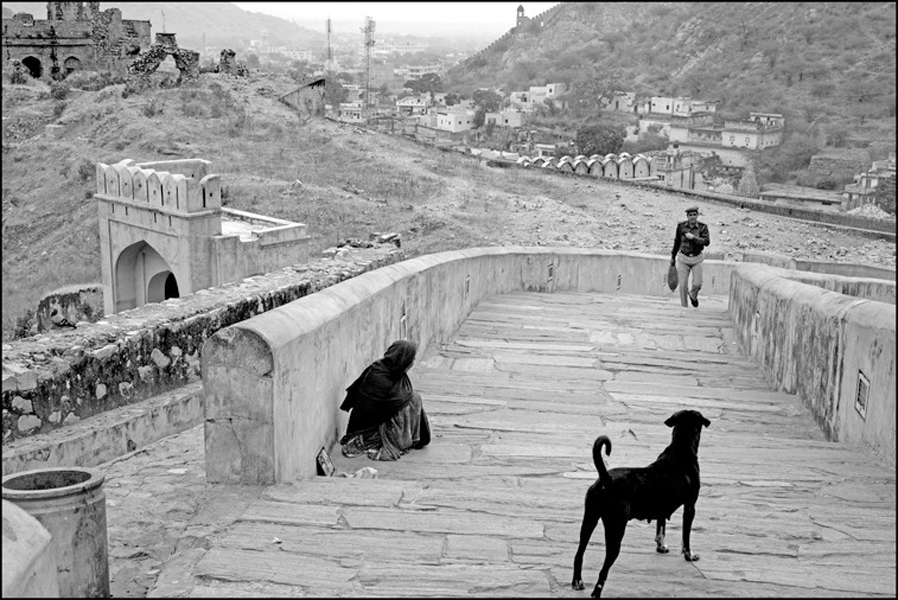 My encounter with Hinduism began long before I set foot in India, on 27 March 2009, during the second year of my journey among Buddhists. The Polonnaruwa Museum in Sri Lanka holds endless rows of Buddha figures with stone features forever frozen in beatitude. By the time I passed statue number ten I no longer paid much attention to the succeeding ones. Buddhist art – which seems to have only ever reproduced the head and body of its founder – is indisputably a sublime art, but little more than an eternal repetition.

In the wing dedicated to Hindu art I found myself transfixed, literally, before a small statue of Shiva Nataraja performing his cosmic dance. His complex movement, his graceful gestures beckoning spirituality, his androgynous nature mesmerized me.

Hinduism may be the least egalitarian of the great religions, but what diversity exists in its artistic expression! I very much look forward to my next plunge into the Hindu world.