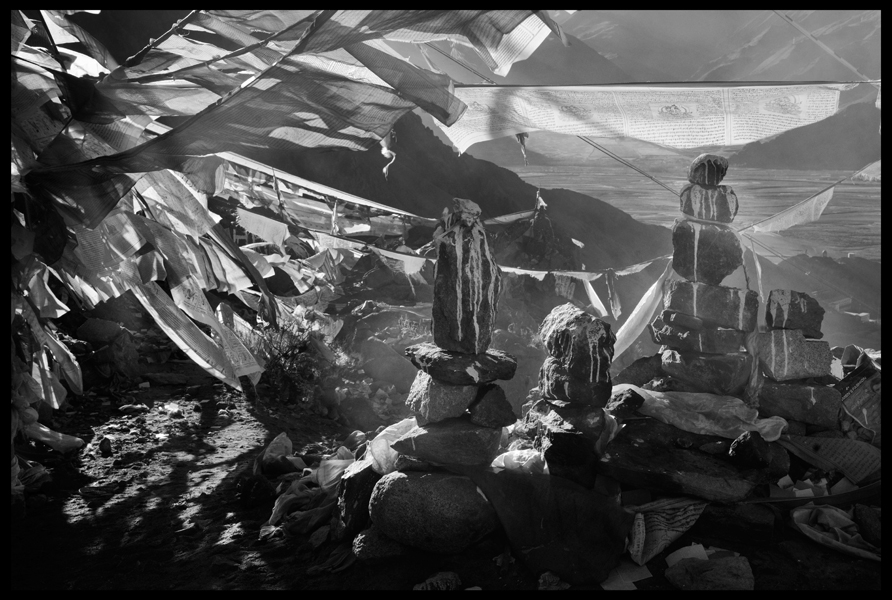 CHINA. Tibet. Near Lhasa. 2009. Shamanic-looking oovas (piles of stones) dedicated to spirits cohabit with Buddhist prayer flags. Milk is offered to the stones by pilgrims. | License 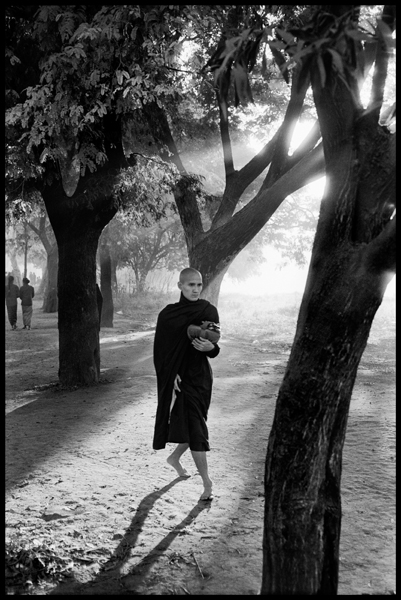 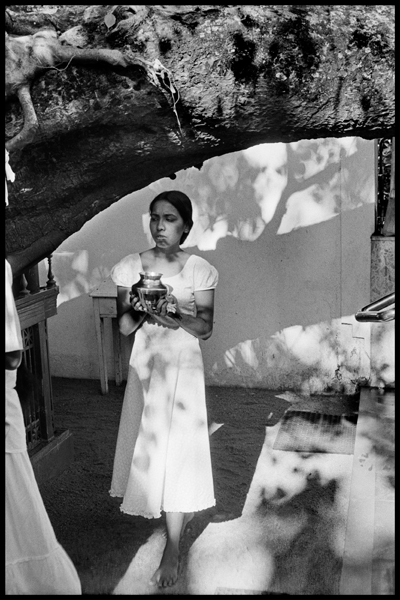 SRI LANKA. Colombo. 2009. Ganga Ramaya Buddhist temple. A young woman circles the bodhi tree with a jug with which she waters the sacred tree. | License 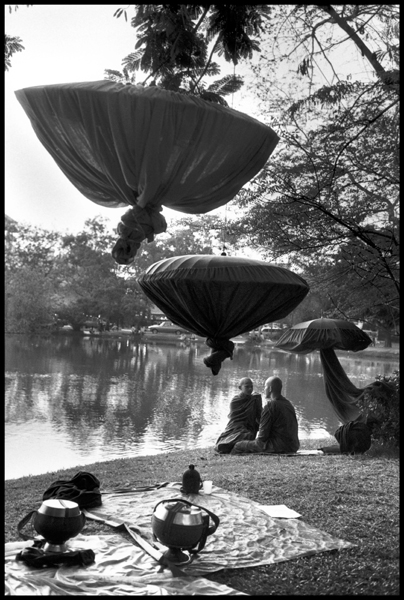 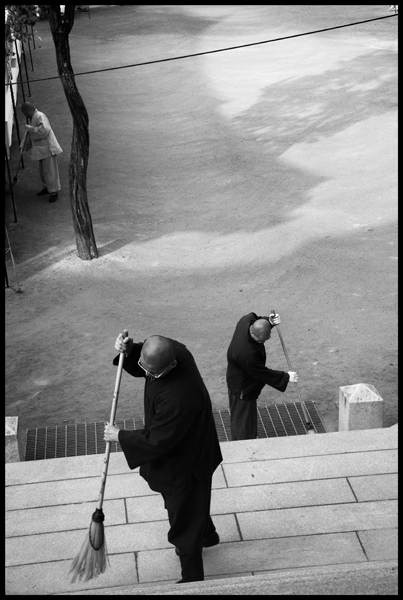 KOREA. 2007. The Haeinsa monastery houses the Tripitaka Koreana, the largest, most complete set of Buddhist scriptures in existence, written on ancient wooden tablets. At dawn, monks and novices sweep the grounds of the monastery. | License 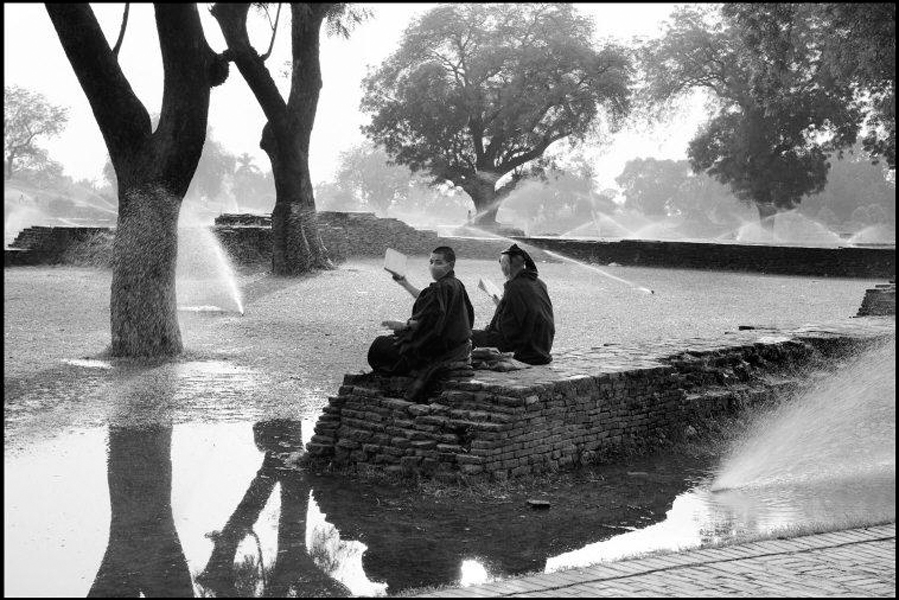 INDIA. 1. Uttar Pradesh. Sarnath, where the Buddha is believed to have reached enlightment. Two Tibetan Buddhist nuns read sacred texts among the ruins whose gardens are being watered. | License 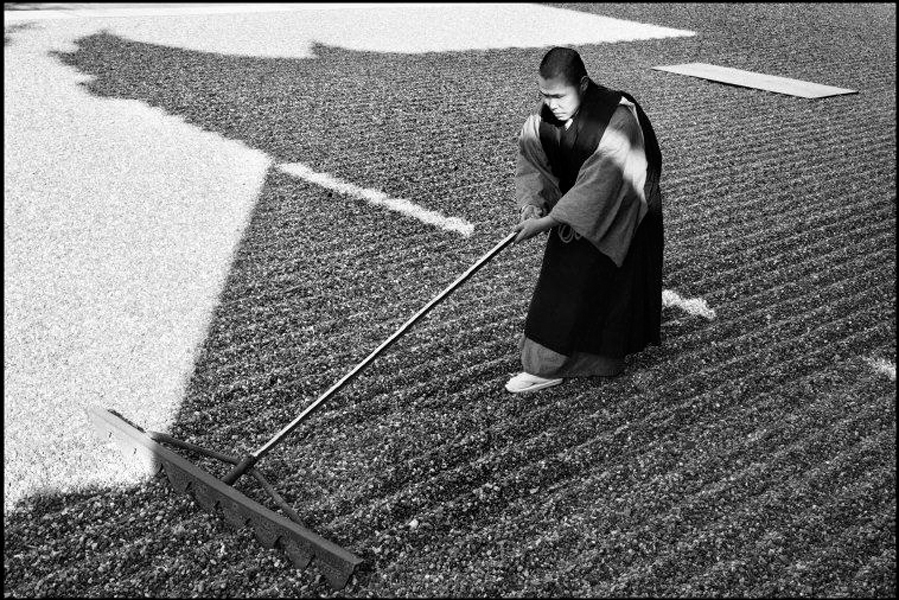 JAPAN. Uji. MANPUKU-JI Buddhist temple of the Obaku Zen school. At dawn, a monk attends to a Zen stone garden with a heavy rake. | License 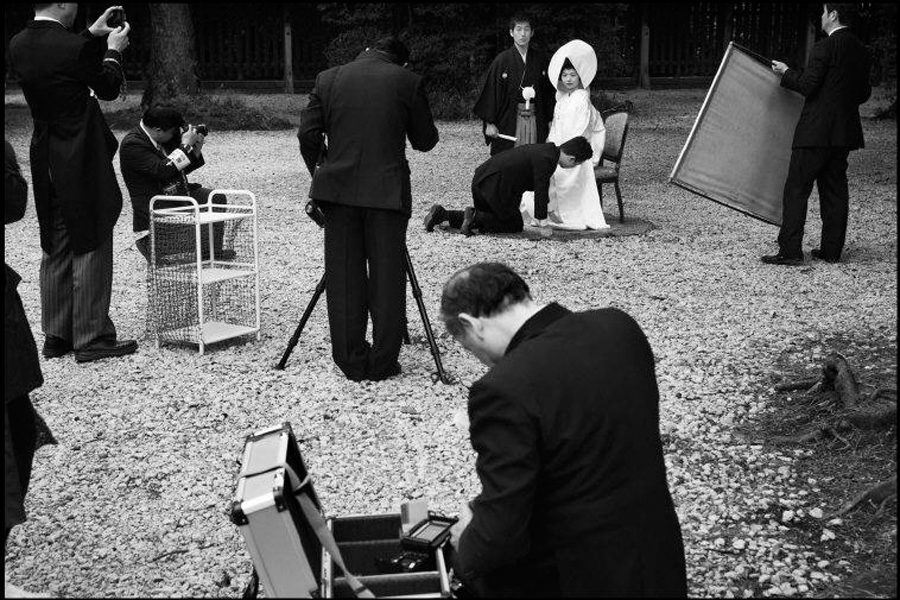 JAPAN. Tokyo. The MEI-JI Shinto shrine. A couple in formal traditional clothes poses for photographs before the wedding ceremony. | License 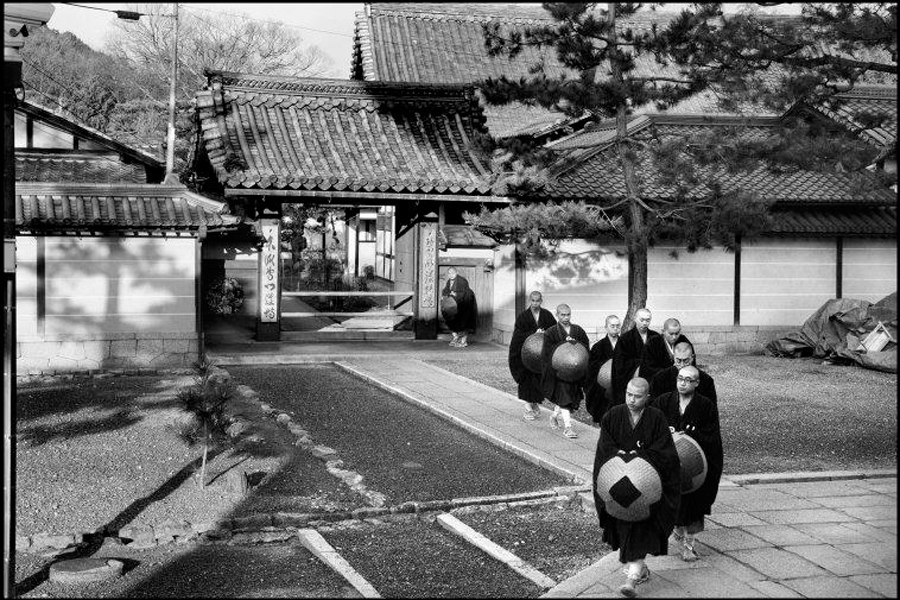 JAPAN. Kyoto. MYOSHIN-JI Buddhist temple complex of the Zen Rinzai school. Monks leave the TENJU-IN monastery to beg for alms in the streets of the city. | License 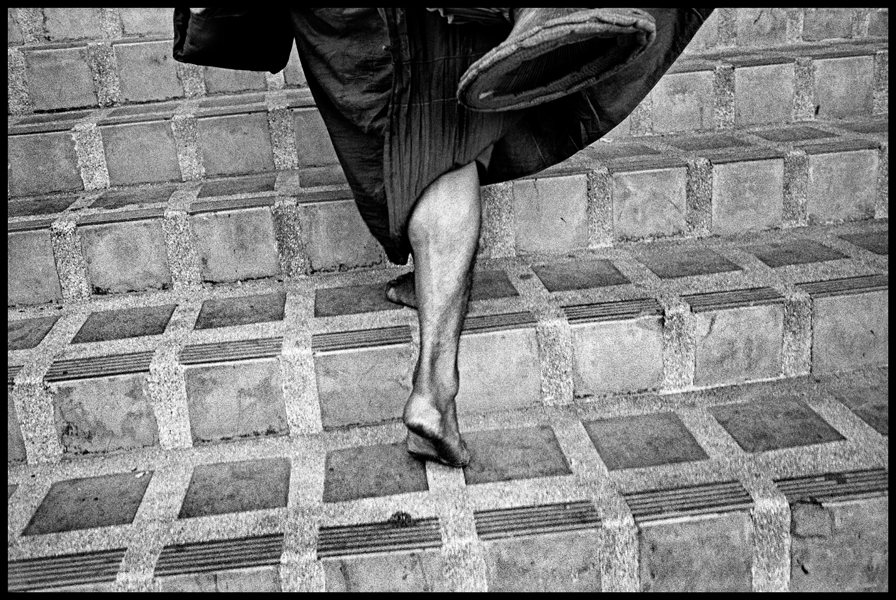 THAILAND. Chiang Mai. 2008. Wat Doi Suthep. A monk climbs the stairs leading to the temple set on a hill. | License 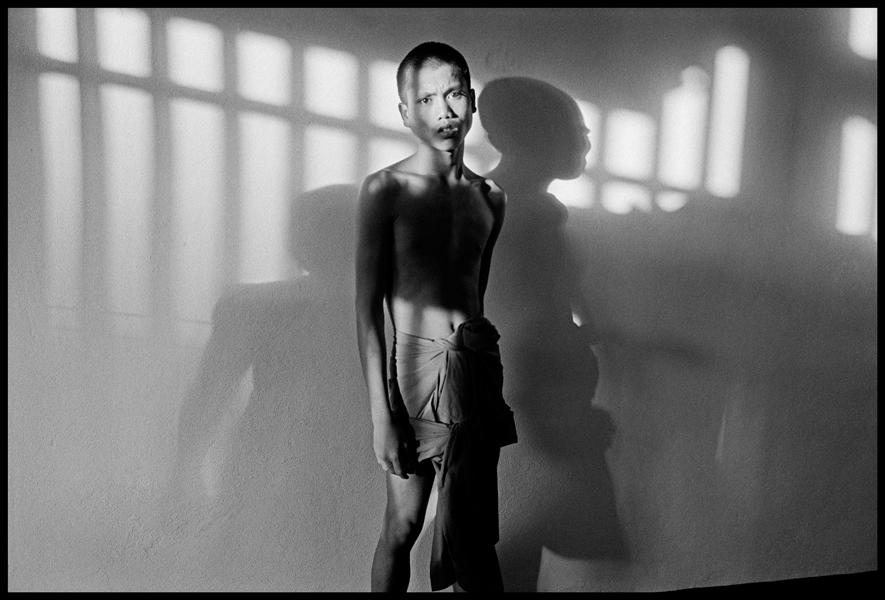 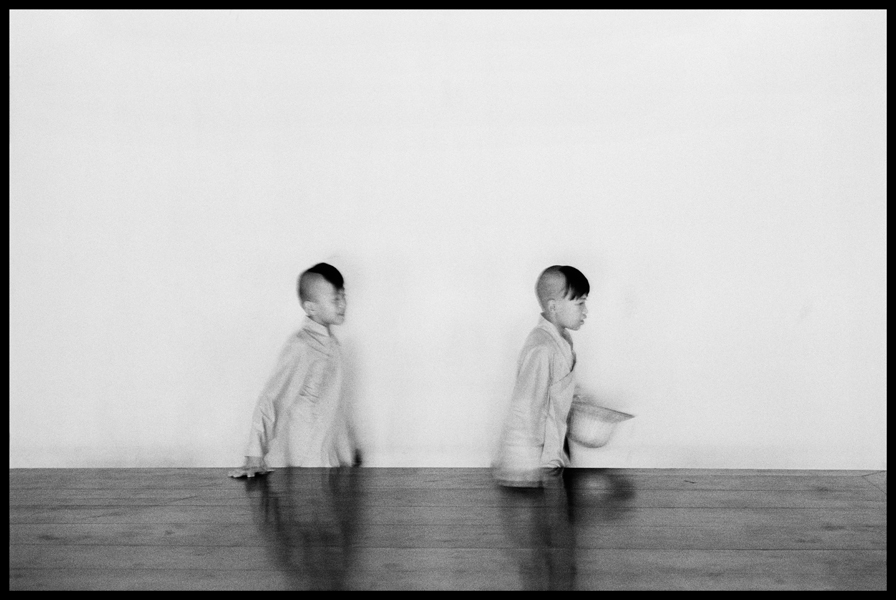 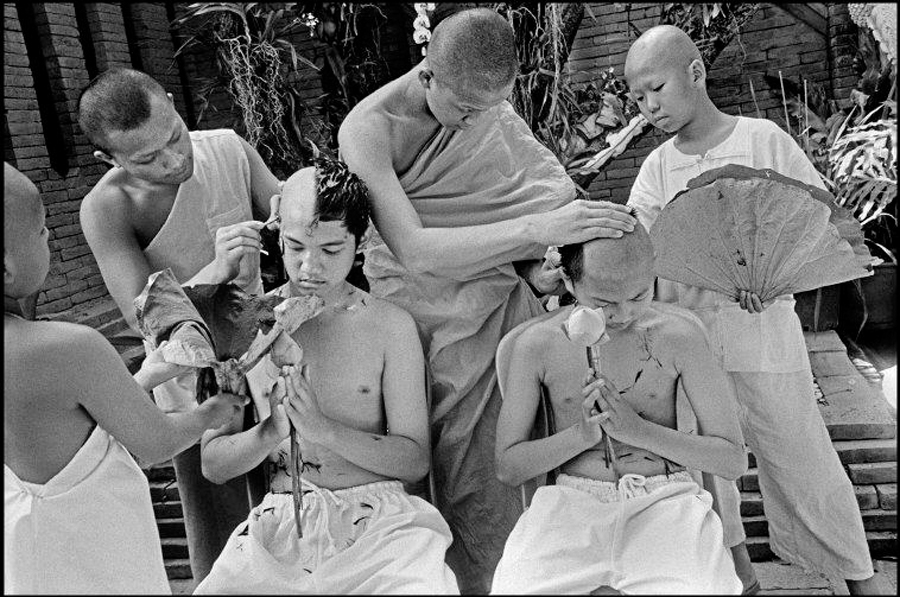 THAILAND. Chiang Mai. Wat LOK MOLEE. Young Buddhist monks shave the hair and the eyebrows of boys who are to be ordained novice for a period of two weeks. The boys hold a lotus flower and incense sticks in their hands joined for a wai, the Thai gesture of respect. | License 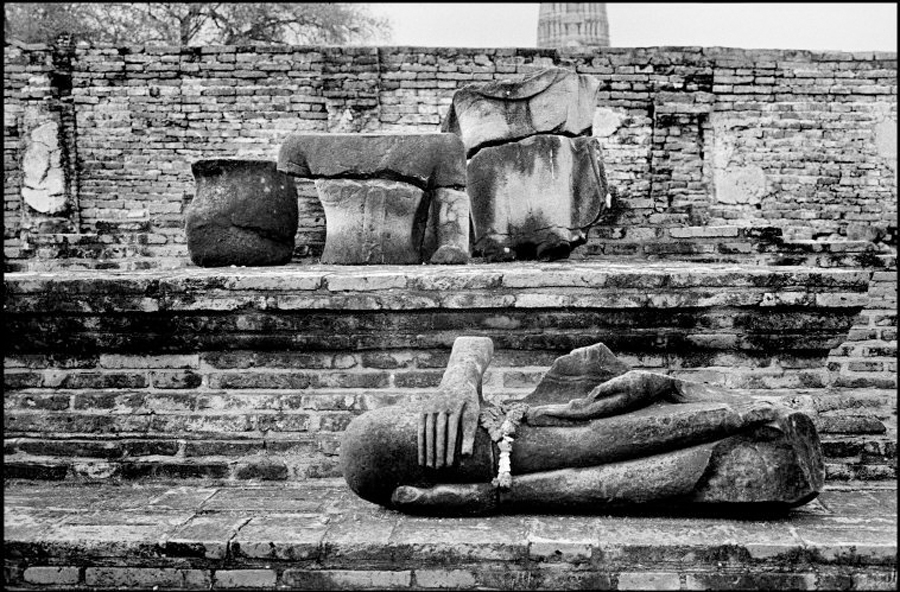 THAILAND. Ayuthaya. A garland of flowers was offered to a Buddha, although most of the sculpture is missing, lost in the ruins of the temple. Buddha is always worshipped, whatever its condition. | License 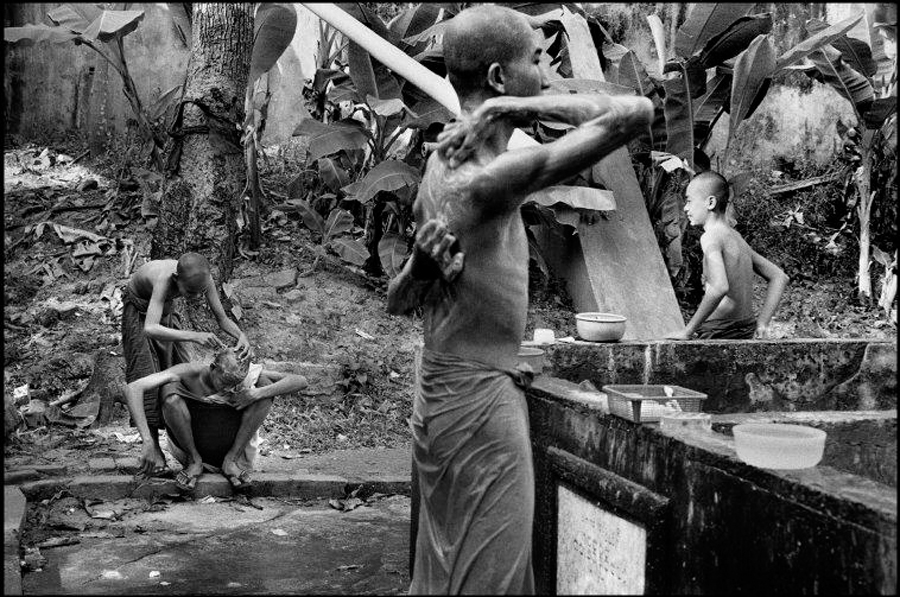 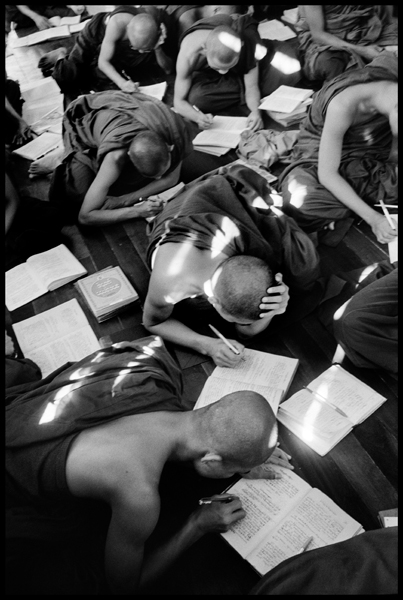 MYANMAR. Mandalay. 2009. The Kyaung Ma Soe Yein Nu monastery is the largest in the country with over 3200 monks and novices. Monks attend class, lying on the floor. | License 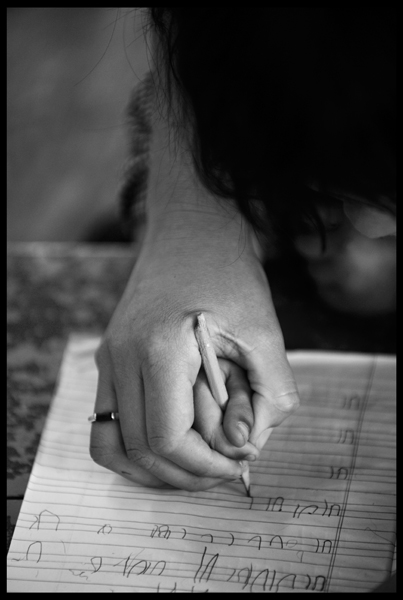 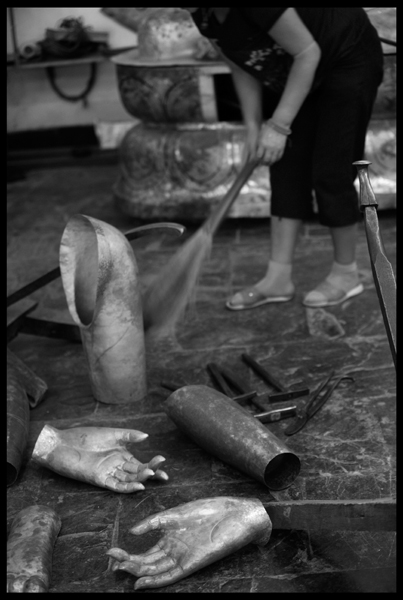 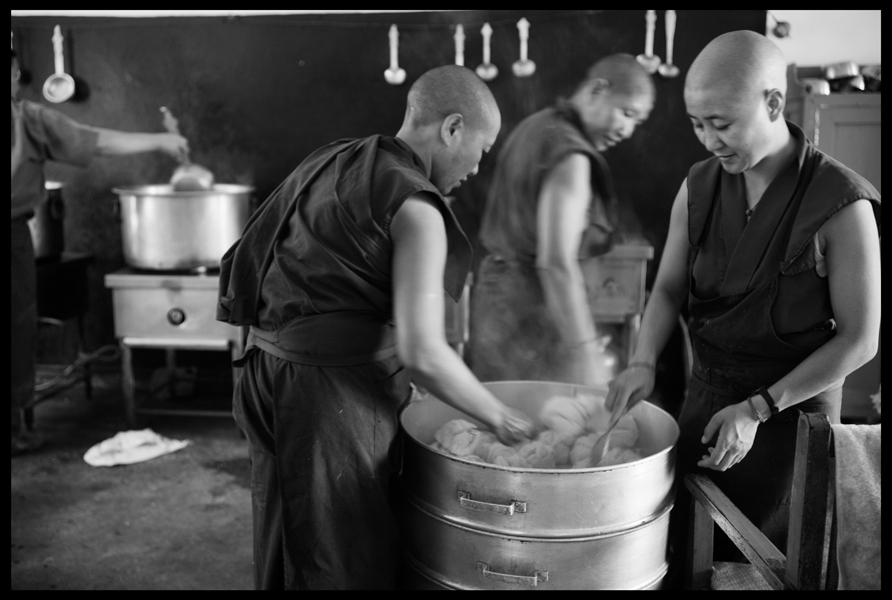 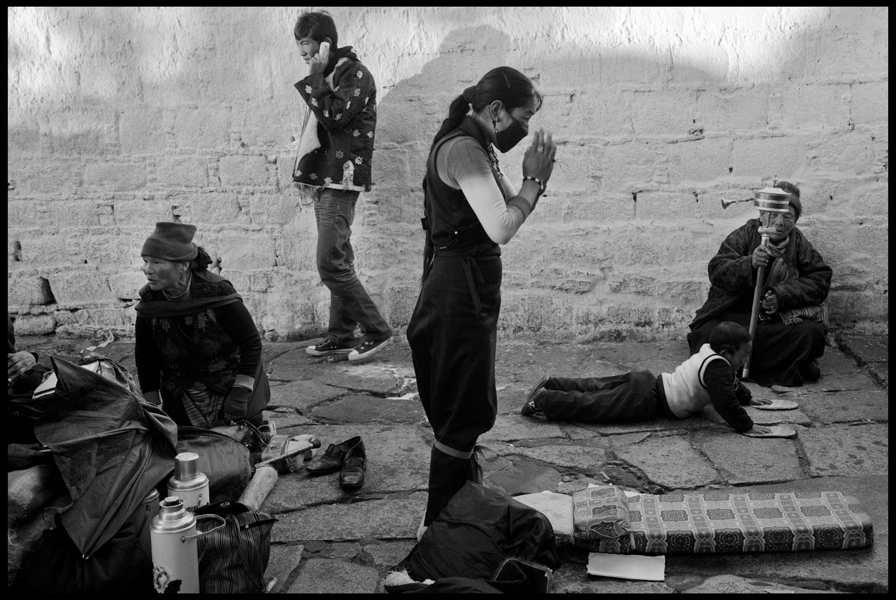 CHINA. Tibet. Lhasa. 2009. A Buddhist pilgrim performs the ritual of prostration around the Jokhang Temple, another uses his cellphone. The thermos bottles hold yak butter for lamps inside the temple. | License 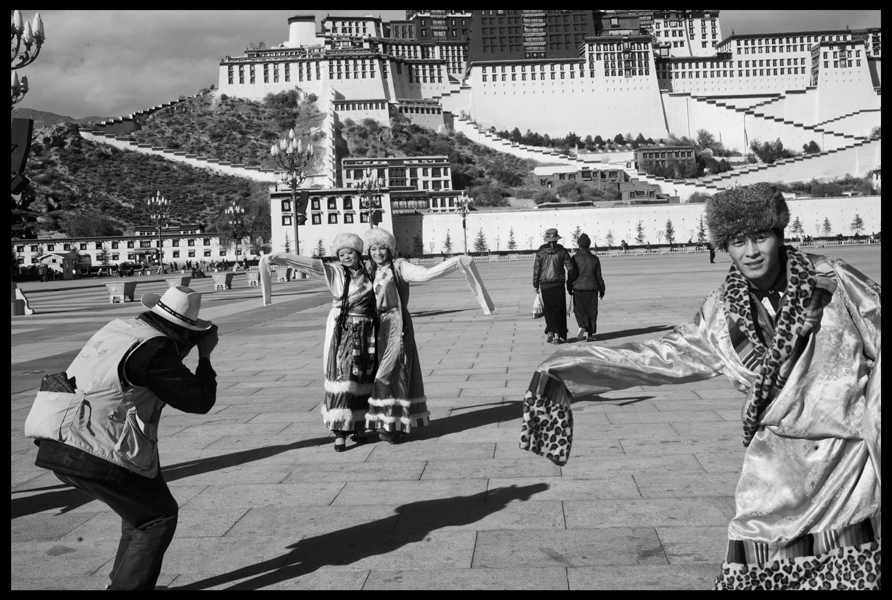 CHINA. Tibet. Lhasa. 2009. Ethnic Han Chinese tourists don Tibetan traditional clothes to be photographed, for a fee, in front of the Potala. | License 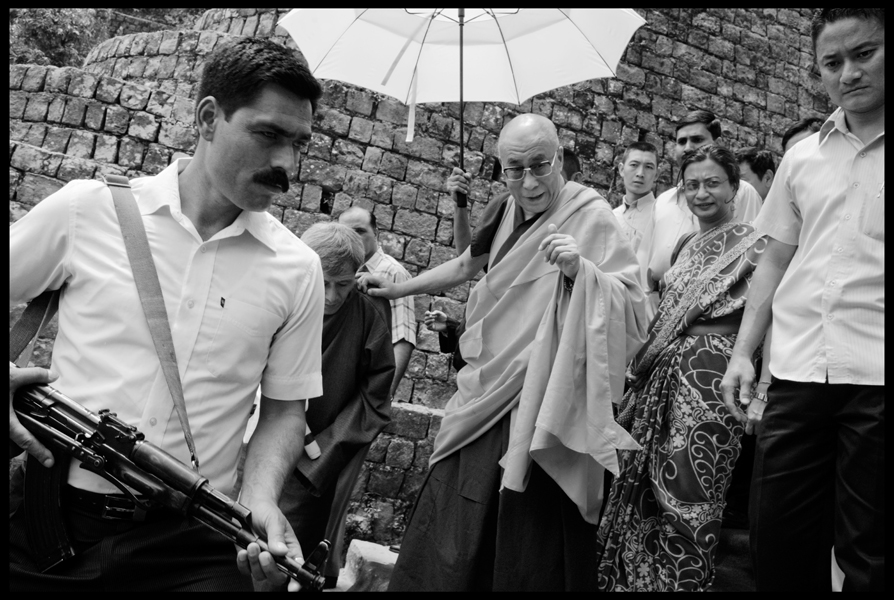 INDIA. Himashal Pradesh State. Dharamsala. 2010. An Indian police officer, armed with a Kalashnikov is part of the detail protecting the Dalai Lama who leaves the TCV (Tibetan Children Village) where he has lectured. | License 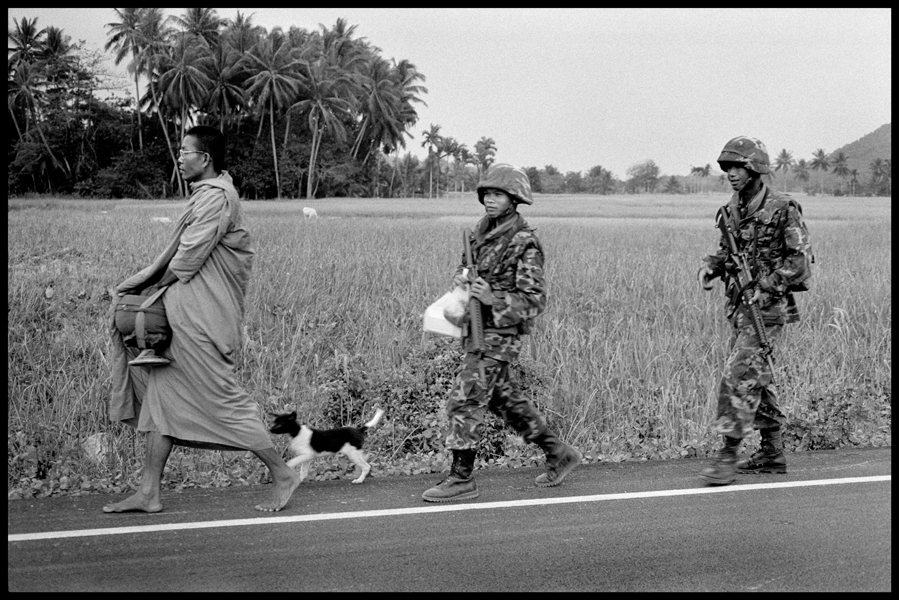 THAILAND. Sai Khao. 2004. A Buddhist monk, accompanied by two armed soldiers who protect him from possible attack by Muslim separatist insurgents, goes out of his monastery at dawn to collect alms. | License 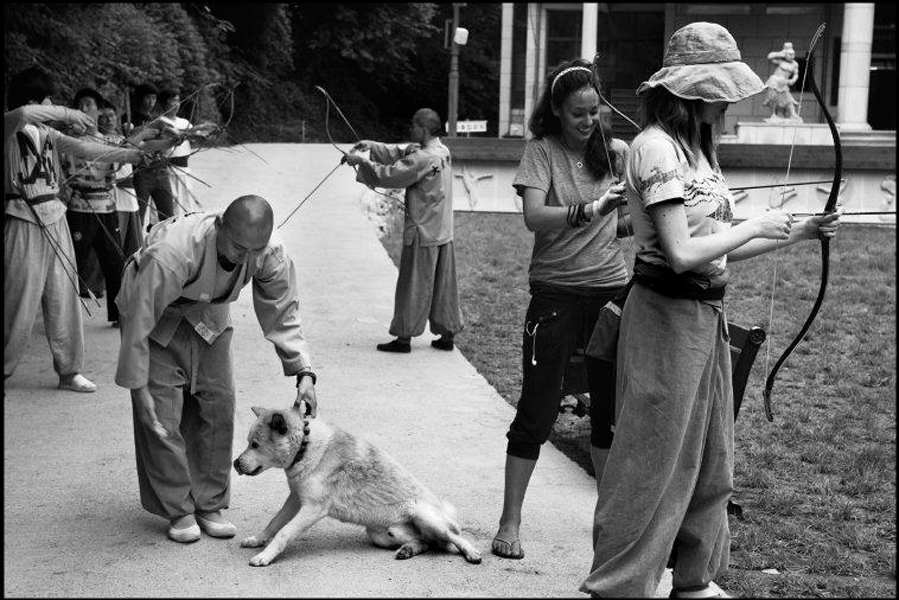 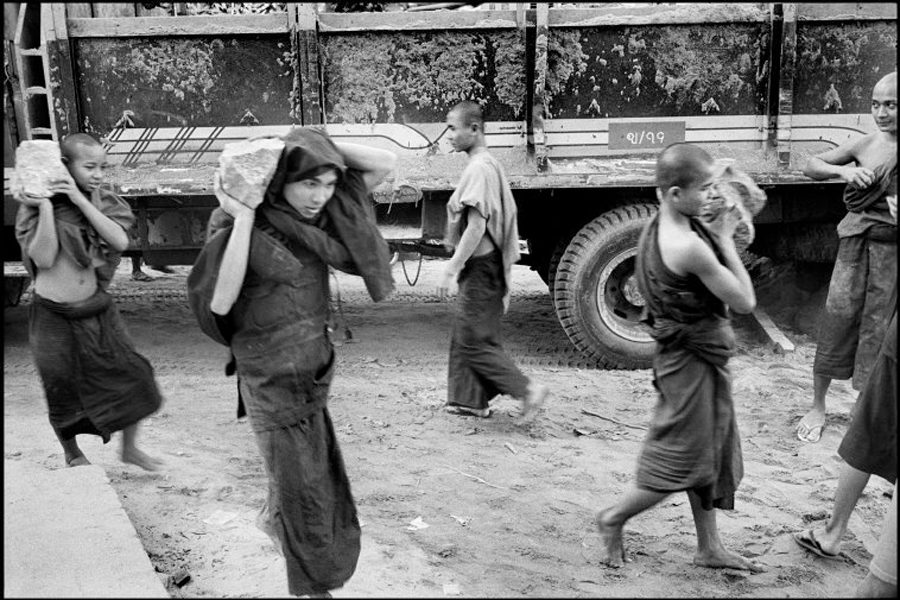 MYANMAR. Mandalay. The Kyaung MA SOE YEIN NU monastery is the largest in the country with over 3 200 monk an novice students. Monks and novices carry stones to fill in the foundations of a new building in the monastery. | License 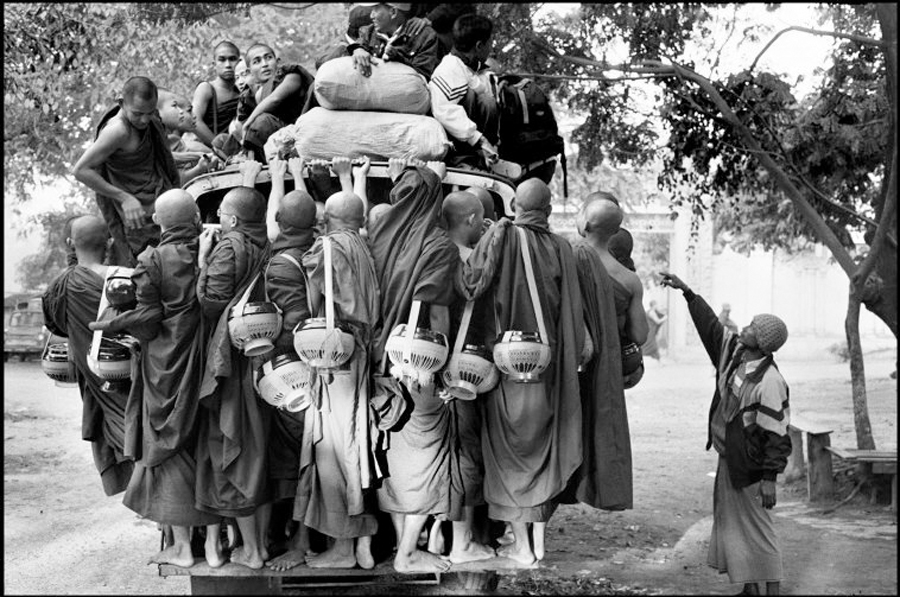 MYANMAR. Mandalay. At dawn, monks overload a minibus, on their way to beg for alms. | License 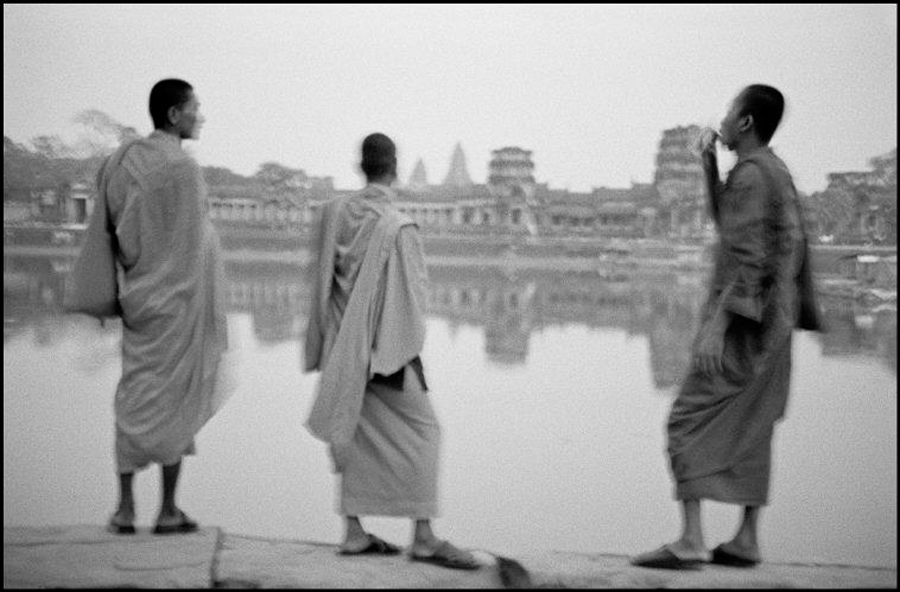 It was October 27, 2007. I was putting the finishing touches to the mock-up of my book ‘In Whose Name?’ on the aftermath of 9/11 when all of a sudden, she appears on the screen of my computer. The caption describes her as an “unidentified prisoner”. Surrounded by commercials, she accompanies a New York Times article quoting the Tuol Sleng death camp photographer, who shot the portrait of each Khmer Rouge prisoner on his arrival, before his inevitable execution.

She is a very young girl, almost a child. What crime did she commit to end up here? She looks at the lens without betraying any emotion; her expression is neutral. She does not blame. We alone know that she is going to die, probably murdered by the blow of a hammer on the skull. We alone feel accused. Was she tortured before this fatal blow? Was she forced to sign a confession, like all adult prisoners?

How could a society of Buddhist compassion accept the massacre or death by starvation of a quarter of its population, a true self-genocide? For if the Khmer Rouge leaders were Marxist intellectuals educated at the Sorbonne, their cadres, responsible for the abuses, were not. Were they not Buddhists? In recent weeks, I was wondering what new project I should undertake after this long and new dive in Islam and Islamism.